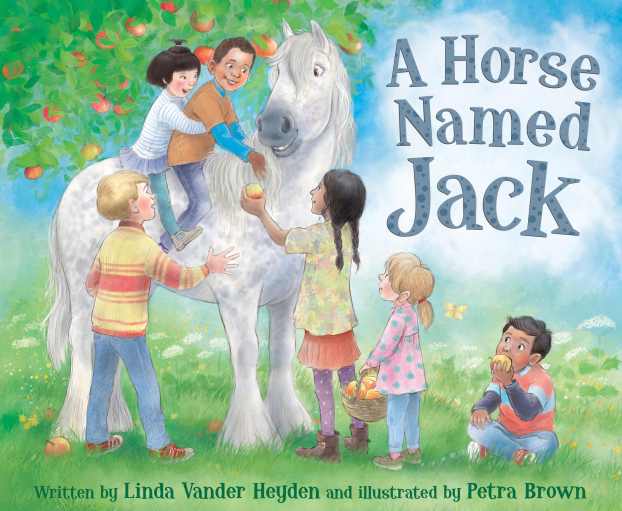 How high can you count?

A hundred?  A million?   Maybe even higher?  Did you have any trouble learning to count that high – or, as in the new book “A Horse Named Jack” by Linda Vander Heyden, illustrated by Petra Brown, does counting help you keep track of the trouble you’re in?

More than anything in the world, Jack loves children. 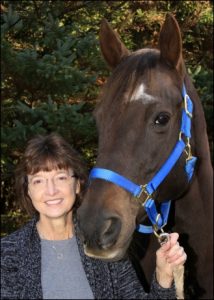 When kids show up on the farm, he romps and plays and smiles. But when nobody comes to visit, Jack gets really sad. And when he’s sad, he stays inside his stable and he’s bored. And when Jack gets bored, he looks for something to do…

So he “performs his favorite trick” and lets himself out of the barn. The first things he sees are three roosters sitting on a fence, and he goes to say hello to them. Then he rips up a few grain sacks, just for fun; he bothers a litter of kittens and scares them away; and he munches on six hay bales that he’s really not supposed to have.

Once outside, there are lots of interesting things to  do. Jack finds some spiders building a big web on the fence post. He tries to play with a pen of piglets, but Jack’s too big for that and he frightens them, so he tiptoes over and reaches through a window of a farm house and steals some apples there on a shelf. Over yonder is a pond with ducks; maybe he can play with them.

But wait. What’s that delicious smell?  It’s carrots!  They’re in a garden, and Jack decides that he wants some —although, his neighbor has a totally different opinion on that idea. She’s not happy at all, in fact, and she chases Jack away.

She throws ten tomatoes at him as he runs away as fast as he can, followed by a whole bunch of animals who heard the commotion. But though he can see the barn and he’s almost home safe, there are a lot of other things between the barn door, a great big happy surprise, and one tired, naughty, dirty horse.

How will you love Jack?  Let us count the ways, literally, because “A Horse Named Jack” does double-duty for your child.

As an adorably-rhyming picture book, this one will appeal to kids who love animals, farms, tales of mischief, or all of the above. Author Heyden makes Jack a not-so-dull boy, and kids will laugh — especially because his tale is paired with vivid illustrations by Petra Brown. But there’s more to this book than just a story and pictures: in a very subtle and very charming way that doesn’t sound like learning, “A Horse Named Jack” is also a counting book from 1 to 10 and back again.

For very little readers — kids up to age four —that’s going to be a combination they won’t be able to resist, and one that you should just get used to re-reading. Will your child love “A Horse Named Jack”?

You can count on it.

This week at the Boyle County Public Library , June 2