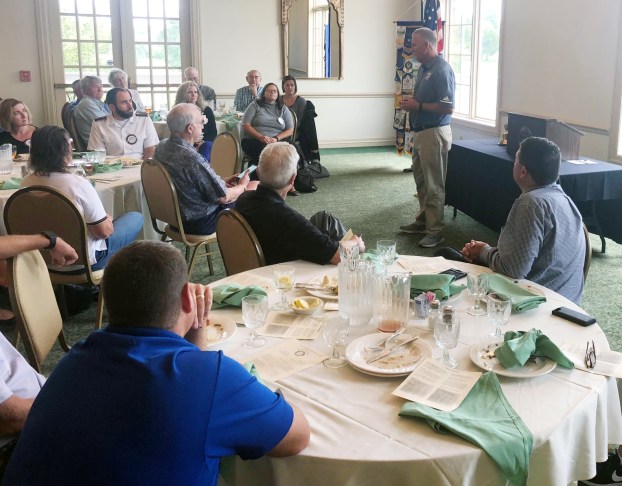 Chuck Smith, Boyle County High School’s (BCHS) head football coach for 15 of the last 26 years, was the first of the two local high school football coaches to speak to Danville Rotary Friday. Coach Smith started his career at Boyle in 1992 and stayed for 12 years before returning to his alma mater as a linebacker coach for the next 11 years. In 2015, he returned to Boyle County. He has accrued countless wins, state championships and Coach of the Year awards.

Coach Smith began by saying, “the people at my table agreed that when Clay and I preview the upcoming season at Rotary, the football season has officially started. So let’s get the season underway.”

Boyle is the defending state champions and there’s a lot of hype about their team repeating as state champions. According to Smith, a lot has to improve with the linemen and the team’s leadership, before repeating as state champion can become a reality. Coach Smith’s biggest concern is the loss of 22 seniors, including ten of their best linemen. Boyle is left with only three veterans on the line in both offensive and defensive squads. He is particularly concerned about the inexperienced offensive line.

Smith said Boyle doesn’t traditionally have a lot to speed, but he thinks the returning junior class has some guys that are pretty fast. 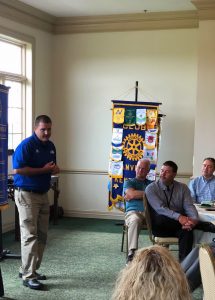 “Speed can make up for a lot of mistakes. The big guys can’t tackle somebody if they can’t catch him.”  Smith is counting on their senior quarterback, Reed Lanter, for offensive power. Boyle’s receivers are capable of making some big plays, too. Receiver Reese Smith has college scholarship offers that include Cincinnati and Troy. Junior running back Landen Bartleson has scholarship offers from Louisville, Purdue and Colorado.

Their freshman kicker, Jackson Smith, is rated #1 in his class nationwide. He is a special talent. Smith said, “He’s not only gifted, always working his skill. You see him out here on his own and sometimes with his dad. His dad was a kicker at UK too. He will be a scholarship player by the time he is a senior.”

Coach Smith feels Boyle is opening their season against one of the best teams they will play all year long.  Ballard’s deep roster is a big reason the Bruins are expected to improve on last year’s 6-6 record. They are ranked among the top teams in Class 6A entering the 2018 campaign.

The second speaker was Danville High School (DSH) football coach Clay Clevenger. Coach Clevenger played at DHS under Sam Harp when Danville won the state titles in 1992 and 1994. Clay has been head coach at DHS for five years. He won the Bill Vaught Memorial Coach of the Year award last year for the team’s class 2A state championship title.

“I was coming back from dinner, I guess it was four years ago. My wife and I heard over the radio that Coach Smith would be returning as head football coach at Boyle County High School. We had just finished 6-6 and finished in sixth place. So my wife said, ‘Oh great, Coach Smith who has won 5 state championships, is coming back … just what we need!’”

Coach Clevenger said he knew he had to step it up. And he has. That was 2015. In his first year at Danville, he had 23 kids on the roster and they finished in sixth place. Clevenger’s dedication to hard work helped make Danville the 2016 state runner-up and the 2017 state champs.

This year, Danville has 59 kids on the roster. There are 90 seniors in the school and 22 are on the football team, which is 24 percent of the class. The balance is roughly equally divided between the remaining classes.

When asked about the early line on the Admirals versus the Rebels in two weeks, Clevenger immediately said, “Boyle by a lot.” The next question was about the winning field goal in the 2017 game that Danville won. Clevenger said a lot of mistakes were made in the game by both teams. But he said that it is such a highly anticipated game in the community that the players work very hard and play with intensity.

Hazlett is actually a soccer player. He actually played a soccer game before coming to the football game at halftime. “We have equipment in our locker room and he changed it and he was able to come out and hit a game winning field.”

Clevenger said that Hazlett’s leg will be vital for the team on kickoffs as well as field goals this year too.

The Admiral’s first game of the 2018 season will be against Woodford County at home. “First game season you never know what to expect.” Following Woodford County, the Admirals play Corbin in their bowl game next Saturday. That game will be a litmus test before the Admirals return to Boyle County to meet the Rebels at home in this year’s county classic.

Danville school board will hold hearing on property tax rate

The Danville Board of Education plans to consider whether to raise property taxes during a public hearing in early September,... read more