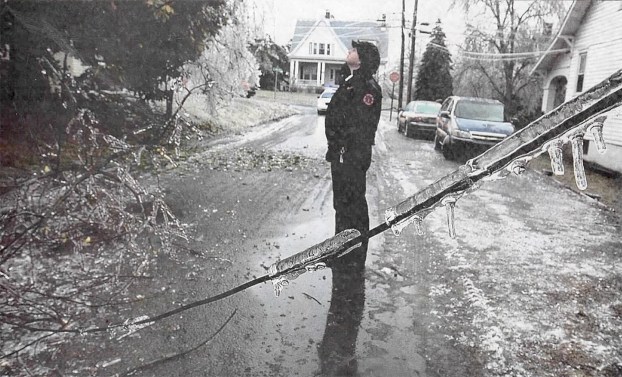 File photo by Clay Jackson Danville Fire Chief Mike Thomas surveys damage on Bruce Court on Tuesday, Jan. 27, 2009, in the wake of a massive ice storm that left tens of thousands of area residents without power for days.

Front page history: Boyle’s weather woes were much worse a decade ago

Central Kentucky has been dealing with viciously cold temperatures this week, but the big chill of January 2019 is small peanuts compared to the big ice storm of January 2009.

Ten years ago today, The Advocate-Messenger published a special Saturday edition as it continued to cover the fallout from the massive winter storm that devastated much of the Bluegrass on Jan. 27, 2009.

When the 2009 ice storm hit, it was so bad that Danville had to “shut down,” according to archives — all roads in Danville were closed except for emergency vehicles. It was rural areas that suffered the longest — it would be a week or more until many of them got power restored. 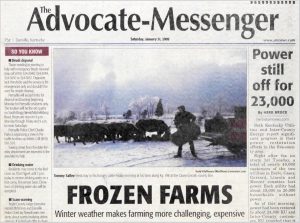 Advocate-Messenger archives
The front page of a special Saturday edition of The Advocate-Messenger published Jan. 31, 2009, was dedicated entirely to continuing coverage of the fallout from the deadly storm that iced much of Kentucky on Jan. 27, 2009.

All told, the ice storm killed more than 50 people nationwide, including at least 24 in Kentucky. The entire Kentucky National Guard was called in to help with response.

According to a report from newsroom veteran Herb Brock on this front page 10 years ago, nearly 40,000 customers lost power initially. Four days later, there were still 23,000 without electricity.

“The east side of Danville and the Streamland area were the hardest hit in Danville, and we are still working those areas and others all around the city of Danville,” Kentucky Utilities spokesperson Cliff Feltham told Brock.

“Crews from utility companies in Chattanooga and Connecticut have joined KU crews from this area, Lexington and Midway in the restoration effort in the Danville area,” according to the report. “Priority was given to water treatment plants, hospitals, emergency service facilities and nursing homes when KU’s restoration efforts began … now, crews are focusing on commercial and residential properties.”

Accompanying the power-outage story was a feature from another newsroom veteran, the late Todd Kleffman, about the difficulties created by the severe winter weather for farmers.

“Normally, I can get my stuff done in four hours. Now it’s taking eight to 10 hours,” farmer Tommy Sallee told Kleffman. “All this extra work, boy, it just makes it that much harder to get started.”

“The multi-pronged assault Mother Nature unleashed this week makes … good times seem a distant dream for farmers like Sallee, who runs about 200 cows on 800 acres spread across three farms along Ky. 198 on the Casey-Lincoln county line,” the story reads. “Winter is never a picnic on the farm, but the extreme weather conditions, coupled with the loss of electricity for many, makes these days longer, more challenging and more expensive.”

Completing the paper’s front-page coverage this day was a story by Charlie Cox about volunteers helping to run emergency shelters. Roger Trent, then the director of the Boyle County Health Department, told Cox that 148 people were using a shelter at Boyle County High School.

The high school was used to consolidate multiple previous shelters — at the Bunny Davis Recreational Complex and Centenary United Methodist Church — into one location.

“I have to say, things are going pretty well at the shelter,” Trent said.

Volunteer Nicole Jameson was a Boyle County High School senior at the time.

“It just feels really good to give back and help people,” Jameson said in the story. “When my mom and dad were talking about going, I knew I want to help out.”

Jameson’s boyfriend had come to visit her from warmer climes and was volunteering with her at the shelter.

“This is crazy,” he said. “I got here today, and it looks like a war zone. Back (home), I was walking around in a T-shirt. And here, it’s just so different. … Being a part of just helping them through this rough time is something.”

The Danville Board of Education plans to develop new policies for how its board members should behave. The board voted... read more