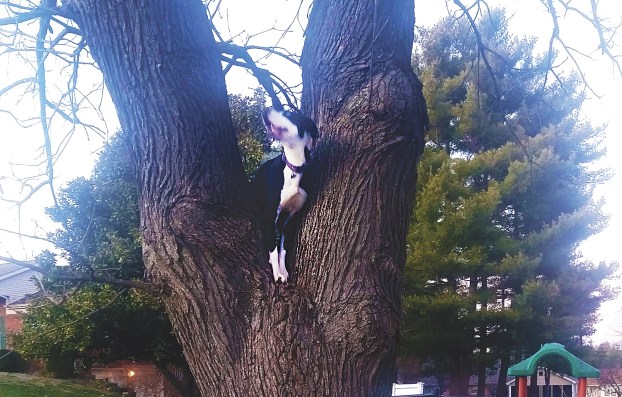 Tales of the canine companion

My dog can climb trees.

I know what you’re picturing right now. You’re smiling indulgently while envisioning that thing dogs do where they put their paws up against the trunk of a tree when they have chased a squirrel up there. It’s so cute, the way they “climb” the tree, isn’t it?

That is not what I mean.

I mean, my dog can climb trees. He charges at the trunk and leaps, scrabbling mightily and somehow managing to gain adequate purchase with his claws to propel him upwards. At first it was just an impressive feat of canine parkour – he’d jump up, ricochet back to the ground, then repeat — but then, one day, he managed to land in a conveniently-placed fork of the trunk.

And there he sat, a good six feet off the ground, gazing down at me with a mixture of exhilaration and alarm. He repeated the trick a couple more times, gaining confidence with each foray up the tree, and I gradually stopped worrying that he would break his leg when he landed.

The tree-climbing routine is the cute side of his exuberant personality. The “powdered sugar bomb” incident illustrates the less-endearing side of that same character trait.

Do you know what happens when you combine powdered sugar with dog slobber? It creates a very sticky, remarkably durable paste. If this paste gets smeared on your hardwood floor or ground into your couch cushions, it is difficult to remove.

How do I know this interesting scientific tidbit? I’m glad you asked. Because my dog is a wimp; I leave him inside when the weather gets cold, rOr when I have an evening commitment (he hates to be in his outside kennel in the dark and make those feelings known by barking nonstop).

Before I leave, I have to Buddy-proof the house, by closing the doors to all bedrooms and bathrooms, setting the garbage cans on the counter and putting away anything remotely edible. This includes containers that previously contained food. Buddy has destroyed three lunchboxes, several plastic Tupperware containers and my good computer bag — which had once contained a brownie, the scent of which apparently lingered for days.

Upon departing for a dinner date with a friend, I overlooked a brand-new bag of powdered sugar that was sitting on the counter after a recent shopping trip. When I returned home, said bag of sugar was all over my house. The living room looked like the scene of a major drug bust. There was white powder everywhere, but particularly concentrated on the couch.

Apparently, Buddy entertained himself by jumping on the couch while holding the bag in his teeth. This is the only plausible explanation for the splatter patterns. I’ve seen enough forensic crime evaluations on television to know a few things.

The mess was shocking enough, but the extreme difficulty of the cleanup did not improve my mood. The sugary drool paste had solidified on the floor and the cushions and despite my best efforts, as this article went to press my couch was still noticeably crusty.

The entire debacle reached its full height of ridiculousness when, as I was crouched on the floor scrubbing angrily at the couch, I was treated to the unmistakable sound of a dog vomiting in the other room, an activity he repeated several times throughout the night.

On the plus side, we are adding regularly to our family’s treasure trove of funny-stories-to-be-remembered-always. So that’s something.