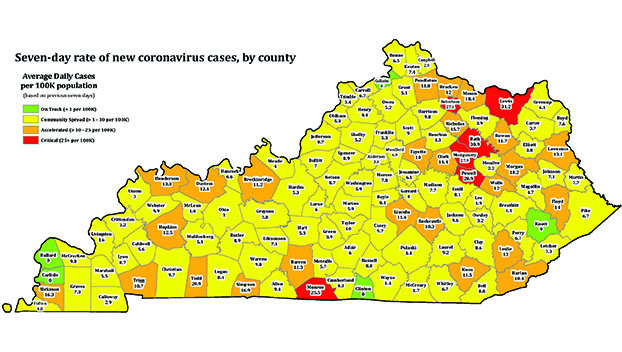 Coronavirus vaccinations and cases continue to slow in Kentucky

Vaccinations for the coronavirus in Kentucky continue to slow, with the state reporting only 9,246 additional Kentuckians getting their first dose of vaccine since yesterday’s report.

That number is in the state’s daily vaccination report but not in Gov. Andy Beshear’s daily press release, which merely reported the latest total: 1,742,037. That leaves the state 757,963 first doses short of 2.5 million – the level at which Beshear said, two weeks ago, that he would lift most capacity restrictions.

As vaccinations have slowed, Beshear has said his moves would be more incremental, and his goal isn’t mentioned in today’s press release. Instead, it quotes him as mentioning his visits to a variety of vaccination sites, “from a mobile clinic run out of an emergency management van that can meet people where they are, to a pop-up clinic at a professional soccer game. No matter where you are, there’s a convenient, and sometimes even fun, place where you can get your shot of hope, protect yourself and save lives.”

The pandemic remained on a slightly downward plateau Wednesday. The percentage of Kentuckians testing positive for the virus in the last seven days was 3.11%. That was the lowest since April 11, which was the end of a three-week stretch when the mean of the daily averages was 2.91%.

The state reported 747 new cases of the virus, lowering the seven-day rolling average to 532, about where it has been for six days. The statewide rate of daily new cases over the last seven days is 10.41 per 100,000 residents. The New York Times says Kentucky’s rate is 37th among the states.

Hospital numbers went up. Kentucky hospitals reported 434 Covid-19 patients, 37 more than Tuesday; 119 of them in intensive care, up 16; and 59 of those on a ventilator, up 18. Hospital-readiness regions in Southern Kentucky reported more than 80% of their intensive-care beds occupied: 91% in Lake Cumberland and 81% in Barren River.

In other pandemic news Wednesday:

• Alicia Diaz, an intern for Stat, the medicine-and-science publication of The Boston Globe, wonders why more communities aren’t using door knocking and personal appeals from neighbors to promote vaccination. “Door knocking has several key advantages over print fliers and social media posts,” she writes. “Most directly: It’s far better at building trust where there might not be much.”

• Conflicts over use of emergency powers in the pandemic are not all partisan. The Republican governor of Indiana sued the Republican-controlled Legislature to block a new law giving it more authority to call itself into session when the governor declares an emergency. “Republican legislators pushed the bill after criticism from many conservatives over the mask mandate and other Covid-19 restrictions that Holcomb imposed by executive order with the General Assembly not meeting for about nine months after its 2020 session ended,” The Associated Press reports.