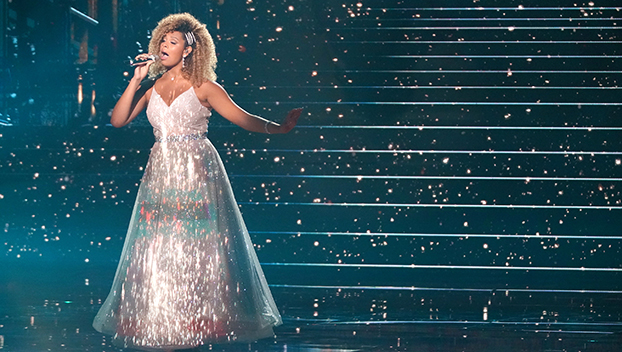 Alyssa Wray gives a performance of “A Dream is a Wish Your Heart Makes” from Disney’s “Cinderella.” (ABC/Eric McCandless)

Perryville singer Alyssa Wray found out she didn’t make it into the top seven contestants on this season of ABC’s “American Idol” on Sunday night. It was following Disney night on the show, when she sang “A Dream is a Wish Your Heart Makes” from “Cinderella.”

She donned a sparkling white dress inspired by the movie and gave what celebrity judge Katy Perry called her most controlled performance so far, and celebrity judge Lionel Richie said she did a good job holding onto suspense and saving her singing personality and big notes for toward the end of the performance rather than giving them to the audience up front. Celebrity judge Luke Bryan also complimented the singer.

After Wray received only positive reviews from the judges and everyone gave their performances, Wray and the other final contestants lined up onstage to hear the final verdict. Chayce Beckham, Casey Bishop, Willie Spence, Hunter Metts, Caleb Kennedy, Grace Kinstler and Arthur Gunn had made it through, while Wray, Deshawn Goncalves and Cassandra Coleman were eliminated.

And they’re off, once again! Woodlawn students race in stick horse Derby

PHOTOS BY OLIVIA MOHR AND ROBIN HART In recognition of the Kentucky Derby, Woodlawn Elementary School kindergarteners gathered on the... read more