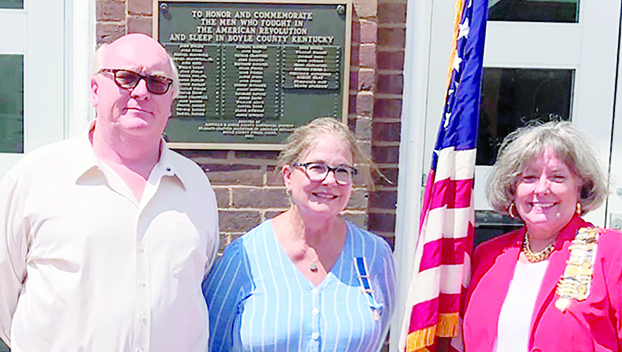 John Buckler, a descendant of Henry Sparrow whose name was added to the plaque honoring Revolutionary War soldiers who are buried in Boyle County, along with his wife Lorna, of Berea, and DAR St. Asaph Chapter Regent Judy Sieweke stand in front of the plaque on Tuesday after it was unveiled and rededicated in front of the Boyle County Courthouse on Tuesday. -Photo submitted

Just in time for the Fourth of July Holiday, which celebrates the passage of the Declaration of Independence formalizing the separation of the 13 colonies from Great Britain in 1776 following the Revolutionary War, the plaque that bears the names of soldiers who fought in the war and are buried in Boyle County was rededicated on Tuesday by the St. Asaph Chapter of the Daughters of the American Revolution, and included three more names.

Through research, the names of Robert Gray, Humphrey May and Henry Sparrow were found to have fought in the Revolutionary War. Attending the ceremony was a descendant of Henry Sparrow, John T. Buckler and his wife Lorna Atwater Buckler from Berea. Others who attended the ceremony were representatives of the Boyle County Fiscal Court and Boyle County Genealogical and Historical Society.

DAR Regent Judy Sieweke said at the program, “Today we honor the men whose names are here and all the men and women who risked everything for a cause worth fighting for — a freedom in a country whose founding documents proclaim God’s standard that all men are created equal. We still embrace that founding’s promise, and remember it today.”

In closing, Sieweke said, “We remember and honor these men, and the freedoms and country they fought to establish. It was a bold move then, and every generation since has had to be rededicated to those freedoms and values. Today we rededicate this plaque, and rededicate our allegiance to the freedoms and the belief in equality of all, ideals that we hold dear in these United States of America.”

Pool open thanks to volunteers and two teenage girls

A neighborhood team of all ages saved their community pool and now they’re inviting others to join in the summer... read more