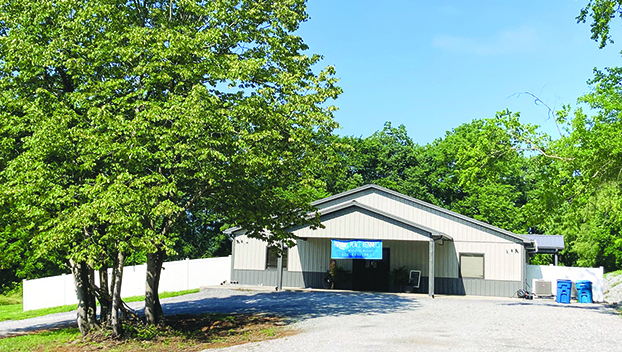 The owner of Parker’s Place Kennels, located at 1845 Harrodsburg Road on the far end of Maple Avenue, wants to expand her business and add a second structure on the property. - Photo by Robin Hart

Parker’s Place, a commercial dog kennel and grooming facility, was given approval Tuesday night to construct a second building at its location on the far end of Maple Avenue (also known as Harrodsburg Road), despite complaints from residents in a nearby neighborhood.

The Danville-Boyle County Board of Adjustments gave its unanimous approval for the Parker’s Place request for a conditional use permit and setback variance at its second public hearing for the project. The first public hearing was tabled in June following three hours of debate and testimony from the owner who said she needs more space to accommodate an increase in her business, and residents who complained that an expansion would increase the nuisance noise problem of barking dogs among other issues.

During Tuesday night’s meeting, Planning and Zoning Director Steve Hunter told the board that the kennel owner, Wendy (Howard) Lannigan, and the closest neighbor, James “JB” Hinkle, had met to discuss a compromise that both parties could live with. “It spurred some of the changes” in the development conditions that Lannigan agreed to, and submitted to the BOA, Hunter explained.

Changes include: No building on the property shall exceed one story; a maximum number of dogs and hours of use in four of the six outdoor play yards would be restricted; and all wall security lights on the west and north sides of the building will not shine on the adjacent Hinkle property.

Another condition was no more outdoor play yards would be allowed until the owner goes requests a formal amendment, Hunter said.

Richard Getty, a Lexington attorney representing Parker’s Place, spoke on behalf of his client. He said the neighbors in Argyll subdivision who were making “allegations” of loud barking dogs should hire a professional acoustical engineer. “Where’s the evidence,” Getty asked.

“What I’m trying to politely say, but pointedly say, until you have evidence, until you can show me … decibel levels are unreasonable, which they are not, then please be quiet.”

He added, “I think it’s unfair for any applicant to come before the board … to have to fend off these kinds of unfounded, unsupported, out of the blue allegations. … If they want to put their money where their mouth is, go hire an acoustical engineer then talk to me. Until then … please be quiet.”

Getty said he “complimented” Hinkle who met with Lannigan to work out a compromise. “Those without any kind of proof are not complimented.”

After a few neighbors from Argyll voiced their opinions as to why the BOA should deny the Parker’s Place expansion project, Hinkle spoke up, too.

“We did have a meeting,” but he wanted to “clarify a few things.” He said, “We agreed to the terms we thought we could possibly live with.” But, he added, “I’m trying to make my life better. … If she abides by what they agreed to, but I won’t know until the building is constructed. … I want her to maintain the noise.”

In the meantime, Hinkle said he may plant more trees to help buffer the property line. He said the photos Lannigan showed at the last public hearing were taken in the summer, when the leaves buffered some of the noise. He then showed the BOA members photos taken in the fall when leaves had dropped.

Later, Getty said Hinkle, “tried to be a gentleman,” and that “he can plant whatever he wants.”

Lannigan said she made several changes and restrictions to her original development plan “to find middle ground” with the next door neighbors. But she didn’t want to agree to a stipulation that she’d never add more outdoor play areas for the dogs in her development conditions.

“I don’t know what my plan is 10 years from now. This meeting is about the building.”

When asked if she agreed to all of the conditions that her attorney committed her to, Lannigan answered, “I will always abide by the rules to whatever I’ve agreed to, yes.”

With very little discussion or more questions asked by the BOA members, both requests for a conditional use permit and setback variance were approved unanimously.

Board member Preston Miles spoke up and said, “When we have adjacent agriculture and residential properties, these are issues that come before our board, and that’s fully appropriate. And this case, the accommodations seem appropriate …”