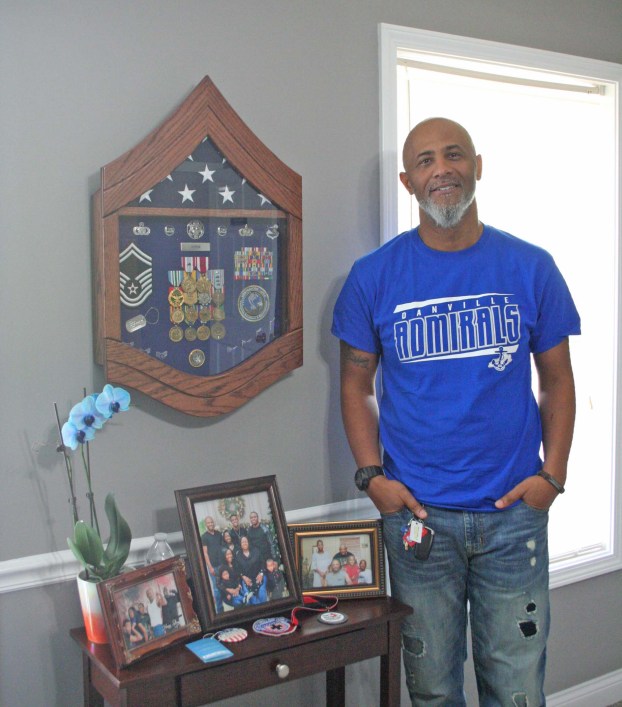 Kendra Peek/kendra.peek@amnews.com James Hunn in his office at Shepherd's House. Hunn is the director of the Circle of Hope, working to help those who have been released as they attempt to get back in the workforce, partnering with mentors, resume building and more.

“No matter where I was in the world, I always felt God would lead me back to Danville, Kentucky,” Hunn said.

He never expected to come back as the director of Circle of Hope, a ministry of the Hope Network, helping those overcoming their addictions through the Shepherd’s House as they work to get and maintain employment after incarceration.

“If you had told me two years ago that this is what I would be doing, I would have told you that you were crazy,” Hunn said, laughing.

Hunn originally came back so that he could become the pastor at a new church. He took that role intending to stay on a while, but he said God had other plans for him. His involvement with the Hope Network allowed him to step up when a new director for Circle of Hope was needed.

“The Holy Spirit has changed my whole paradigm and outlook on ministry,” he said.

Referring to the Samaritan woman at the well, found in John 4:1-42, Hunn said it’s important to “meet people where they are.”

“Jesus met her where she was … we want to be right there with them in their day-to-day struggles,” he said.

Hunn said he “loved every second” of his 27-year career in U.S. Air Force. First stationed in Okinawa, Japan, he said he knew it was what he wanted to do with his life by the four-year mark.

“I knew I was going to be a career airman,” he said. “I loved every second.” 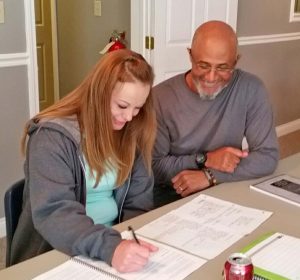 Kendra Peek/kendra.peek@amnews.com
James Hunn works on a resume with Andrea Martin, who has been a program participant at Shepherd’s House for about 10 weeks.

Hunn worked supply, before eventually going into military intelligence, which “opened up a whole different world” for him. His last role was in Washington D.C., was as a senior enlisted advisor to a major general. He retired with the rank of senior master sergeant.

“The Air Force was good,” Hunn said. “I had an outstanding career in the military, but that is not to say that my life did not have it’s problems.”

He said he’s thankful for his wife of 25 years, Linder, who “did a fabulous job” raising their three sons and one daughter.

“I thank God for her every day,” Hunn said.

He also has four grandchildren. Two of his sons have followed his path into the Air Force, their daughter works as a teacher in Washington D.C.

A great deal of his current work as the director of the Circle of Hope is influenced by things learned and experiences had while in the military.

“People saw things in me that I didn’t see and they would challenge me,” he said. In that same way, he said, he reminds clients that people believe in them.

“I tell (clients), ‘You can do it, you have the potential.’ (Circle of Hope) is giving those individuals the tools to accomplish what they want in life,” Hunn said.

The Air Force also instilled in him the importance of giving back to the community and taking care of others.

“That has been a forefront of my ministry, no matter what. It’s always giving back to the community and taking care of people,” he said.

Hunn meets with clients of the Shepherd’s House, giving them help with resumés, job interviews and more.

Circle of Hope also works with mentors, which they need more of, he said, who help provide guidance to participants in the program.

Eventually, Hunn hopes to open Circle of Hope to others in the community that are needing employment, he said.

“It’s just sharing the love of Jesus Christ,” he said.

Hunn said it takes those of “different denominations, different races coming together to say, ‘You know what, this issue of drug addiction is bigger than us all,’ so we’re going to lay down our denominational blinders and boundaries and say, ‘You know it’s about time that we really walk in the love of Jesus Christ and give people hope.’”

Hunn was born in Danville and it was in those early years that he faced possibly the toughest difficulties of his young life.

“That has been a rough struggle, a challenge in my life. Even in that, through my pain, I found hope,” he said. “A lot of people may turn away from God. I asked the questions, ‘Why did this happen to me?’ ‘Why did this happen in our family?’ I’ve been there. I’ve had that real struggle.

“There was a time when I didn’t want to live. I thought about suicide.”

Hunn suffered a spinal cord injury while in the service. His doctors told him he was a “miracle” because he should have been paralyzed. It was the recovery process that forced him to face the trauma that he had hidden away.

“I thank God because of my faith and the Air Force. That is what kept me grounded,” Hunn said. “I had to get mental health counseling. I had to do those things to bring healing to my family, because of the effects that had on me and my relationship with my wife and kids.

“I want to be transparent with people — that’s why I can stand and say there is hope.”

It’s not the first time he’s openly shared about the molestation, Hunn said, but it took him a long time — “47 years” — to get to a place where he could.

It’s important, he said, for anyone who has been through such trauma, or who is battling addiction of some sort, to seek help.

“That’s the key to getting recovery from any type of addiction — getting help.”

One day, while meeting with his counselor, she told him, “James, you’re as sick as your secret.”

Thinking on that, he said realized she was right. Only by being open and honest with others about what had happened was he able to be free of that hurt. But it wasn’t easy, he said, and the revelation has shocked many, Hunn said.

“Many people have said, ‘you were always smiling, you were always happy’ — you never know the pain behind the smiles,” he said. “People look at you — they look at my military career, and they really don’t know the passion or the pain.”

He learned, however, to use those hurts to help others.

“Your pain can become your purpose,” he said. “I could have been a statistic. It hasn’t been easy; I caused a lot of pain to me and to my family.”

That’s how he knows that everyone deserves a second chance. 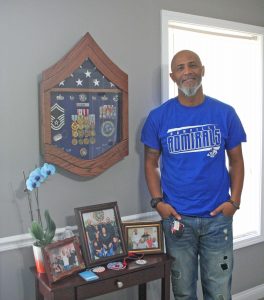 Kendra Peek/kendra.peek@amnews.com
James Hunn in his office at Shepherd’s House. Hunn is the director of the Circle of Hope, working to help those who have been released as they attempt to get back in the workforce, partnering with mentors, resume building and more.

Increases to payroll and net profits taxes in Danville would fund more than $1.5 million in new spending in the... read more