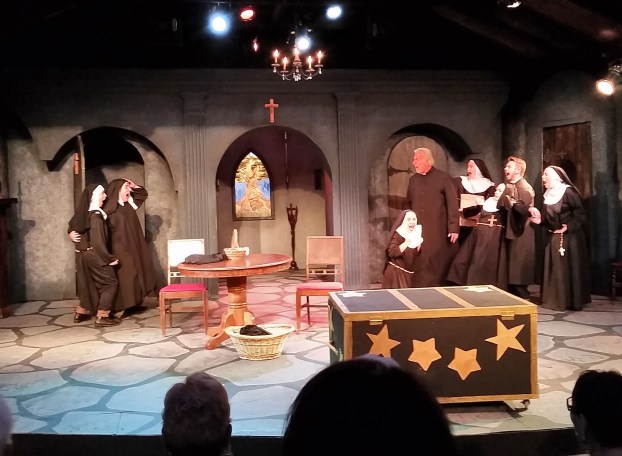 ‘Drinking Habits’ at Pioneer Playhouse is a ‘pile-up of laughs’

For almost a lifetime, the summer tradition in Danville has been to head  over to Pioneer Playhouse as the sun sets and watch plays under the stars. The outdoor theater comes up with new things from time to time, — like its Kentucky Voices series, which emphasizes local playwrights, local people and local places — but the quintessential Playhouse experience will never get old.

The newest play at the theater, “Drinking Habits,” fits well into that quintessential category. When you think about Pioneer Playhouse, you probably think about light-hearted comedies packed with hidden identities, clever word play — and of course, lots of doors for hiding behind and chasing people through.

“Drinking Habits” does not break the mold; it fits perfectly into it. Set in a Roman Catholic convent in the 1930s, it tells the story of a small order of nuns who have a secret: some of them make wine — the “devil’s toilet water” — to sell in the nearby town.

As you can imagine, that’s not the only secret being kept, nor the only scheme afoot. The play is a house of cards that most of the characters run around on top of, leaving the audience waiting for the moment when it all comes crashing down.

Nun’s habits and priest’s cassocks provide plenty of opportunities for characters to change personas as they attempt to realize their goals or hide their secrets.

Playhouse veterans Eben French Mastin and Patricia Hammond provide the structural supports for the play’s facade of insanity. Hammond plays the Mother Superior in the convent, while Mastin plays the priest of the neighboring church.

With Hammond and Mastin set up as the authorities who must be obeyed and from whom much must be concealed, the other characters skitter around the stage, scheming and plotting their means and ends.

Paul (Liam McDermott) and Sally (Giuliana Carr) develop as the closest things to protagonists, though the stage is quite evenly shared among all the characters. Carr gets the biggest laughs, especially in the first act, as she portrays a sarcastic outsider who has no idea how religion works but must pretend she is an expert anyway.

The play climaxes with a cascade of revelations, reveals and surprises. It’s a multi-vehicle pile-up of laughs as each cat-and-mouse game that has been going on since the start of the play crashes into the next.

If you want to have a classic Pioneer Playhouse experience, “Drinking Habits” is just the ticket.

Events for this column must be submitted to the Advocate by *NOON MONDAY* to be in the Thursday newspaper. Send... read more