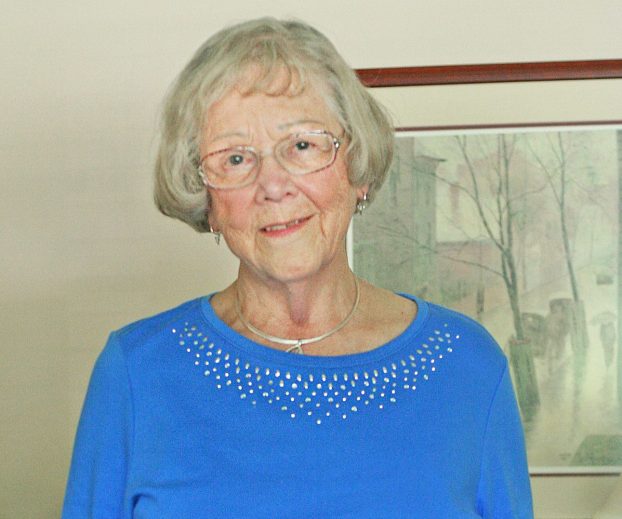 Kendra Peek/kendra.peek@amnews.com Joyce Sanders, 80 of Harrodsburg, holds a poem she wrote, "A dream come true," in honor of completing her associate's degree at Eastern Kentucky University, after leaving in 1957. She is now a few classes shy of completing her bachelor's degree, which she plans to finish this fall, in time to graduate in December.

Harrodsburg native Joyce Sanders finally has her associate’s degree, is close to completing her bachelor’s degree and has her eyes a bigger prize: a master’s degree. What’s noteworthy about Sanders’ accomplishment? She earned her degree this year, 60 years after she first left college. 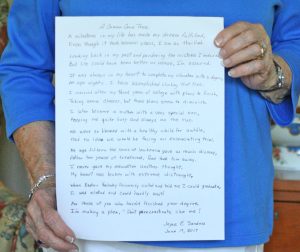 Kendra Peek/kendra.peek@amnews.com
Joyce Sanders holds a poem she wrote, “A dream come true.” The poem is a tribute to her journey after leaving college in 1957, getting married, losing her son and finally completing her associate’s degree this year. She is now a few classes shy of completing her bachelor’s degree, which she plans to finish this fall, in time to graduate in December, and said she hopes she can be an inspiration to others.

Sanders, 80, left college in 1957 after three years of studying. When she left Eastern Kentucky State College, which is now Eastern Kentucky University, Sanders made a promise to her parents that she would finish someday.

She was engaged to her high school sweetheart, Nelson, and the two decided it was time to get married.

“He was in the military. He wanted to get married and said, ‘You can just go with me.’ I thought, ‘Well, that might be fun and I can always finish college later,’” she said.

Unfortunately, things didn’t work out quite as planned — Nelson, who was in the United State Army, was sent to Evreux Air Base in France and there was no where for Joyce Sanders to stay.

Instead, she took a job with Anderson County Schools, teaching first grade on an emergency certification, and continued living with her parents.

“I could have gone back to school, but I thought, ‘Well, maybe I’ll make some money,’” Sanders said. “I had 43 first-graders. It was big … In fact, Anderson County News took a picture of me with my 43 children.”

She stayed there five years and took college classes in the summer.

“Each year, I got a few more hours, but I could never get the right hours that I needed. That was the biggest problem.”

Nelson returned home after two years of service and the two settled down in Harrodsburg. Joyce became pregnant with their son, Dan, and she opted to stay at home with him for a few years.

Over the years, Sanders was also a substitute in the Harrodsburg school system and taught special education classes. Many times, she would teach a class for a semester so the regular teacher could complete his or her degree.

“They went back to get their education, so I took their place and didn’t end up getting mine,” she said.

She spent a year teaching kindergarten at the Kentucky School for the Deaf, too.

Then, life for the Sanders family took a sharp turn when her son Dan was diagnosed with acute myeloid leukemia while in high school.

“Even while he was sick with leukemia, he got his license to work at the radio station. He was a jockey at the station in Harrodsburg and just loved it,” she said, explaining that communications, particularly radio, was a great interest of his.

She said Dan never gave up, and she would help as much as he needed to continue with his daily activities. They balanced the radio station, school and more with regular trips to his doctor in Louisville.

“We did everything humanly possible,” Sanders said.

Then, in April of his senior year, Dan passed away.

“I gave it all up then — I didn’t care whether I went back to school,” she said.

She did keep working — she said she needed to; it was what kept her going after the loss of her son.

At the time, she had been working with adult education in Harrodsburg and chose to continue, starting a literacy program and the English as a Second Language program.

“I got involved in teaching Japanese, Korean, Chinese and just loved it, it was fun,” Sanders said.

She started by teaching English to “Mrs. Okamura,” the wife of the first Hitachi president.

“They came to me and asked me if I would consider teaching her English. I said, ‘I don’t think I can do that, but I’ll try.’ We became very very good friends — she went everywhere with me,” Sanders said.

The two became so close, Sanders was invited to their home in Japan for 10 days.

“It was a good trip. I’d like to go back someday, but I don’t think I’ll make it,” she said, laughing.

Sanders also went with her new friend to visit the woman’s daughter in London, England.

It was 1980 and she began teaching more Hitachi employees and their families. To this day, some of her former students continue to visit when they are in the country, and many have sent her gifts.

“They came one summer, a couple of them, and visited. Some of them are even married,” she said.

Sanders said she always enjoyed teaching, especially when she got to work with children.

Last year, she said she remembered that long-ago promise to her parents, a promise that had gotten pushed to the side. Sanders said she got a little angry at herself for never finishing her degree.

“Life is so short. You don’t realize how time does get away from you,” she said. “I think that’s what really hit me when I was thinking about it that night … I said, ‘Here I am, God. I didn’t do what mother and daddy said to do. I didn’t obey them. Now I am; I hope they can see me.’”

After much thought and prayer, she decided to visit the EKU Danville campus, to see how much was needed to finish.

“It took a little while — they had to go back in the archives,” Sanders said, pointing out that she had started in 1954 and left in 1957.

Finally, she got the call, telling her that the hours from her college years and hours taken at other institutions for her to continue working all cumulated into enough for an associate’s degree in health, without having to take any more classes.

“I had the credits a long time and didn’t know it,” Sanders said. “All those hours added up over the years.”

She opted against participating in graduation.

“I really wanted this to just be a quiet situation. I hadn’t even thought about doing anything publicly,” Sanders said.

A few days later, she got another call from the college: President Michael Benson wanted to meet her.

“I was in awe,” she said, smiling. “There were six of them who came. We had a lovely time visiting.”

She was given an EKU scarf, a mug and a pin.

These days, Sanders spends much of her time enjoying life — she’s part of two weekly bridge games, a member of the Daughters of the American Revolution, a member of the Order of the Eastern Star and plays piano once a month for her church, the Harrodsburg Community Church.

She said she’s a little embarrassed at all the publicity she’s garnered.

“It’s been fun, I’ve enjoyed it,” she said, smiling. “Even the church honored me in June with flowers. They were asking if anyone in the church was getting a degree this year and my husband points at me. I said, ‘What are you doing?’”

Sanders said she believes her son would be proud of her, too.

This fall, she will take two more classes in Danville — all that she needs to complete a bachelor’s of science degree. One of the classes is on resumé building and interviewing, which she said she’s not sure she really needs, laughing.

The other is a writing class, which Sanders said she is looking forward to. She enjoys writing poetry and actually wrote one full of life experience, called “Dream come true.”

The poem ends with “For those of you who haven’t finished your degree, I’m making a plea, ‘Don’t procrastinate like me!’”

She said she has some regrets that it took so long to complete her degree. Sanders said she was sharing those thoughts with a friend, pointing out how life could have been very different had she finished. Her friend simply told her, “God had different plans for you.”

She has found a new joy for pursuing her education. In December, in front of her husband, family and her friends, some from college, Sanders plans to walk in her graduation from Eastern Kentucky University.

“That’s providing I pass my classes,” she said with a smile.

By BEN KLEPPINGER ben.kleppinger@amnews.com Chief Deputy Jailer Brian Wofford has spent close to a decade of his life working on... read more