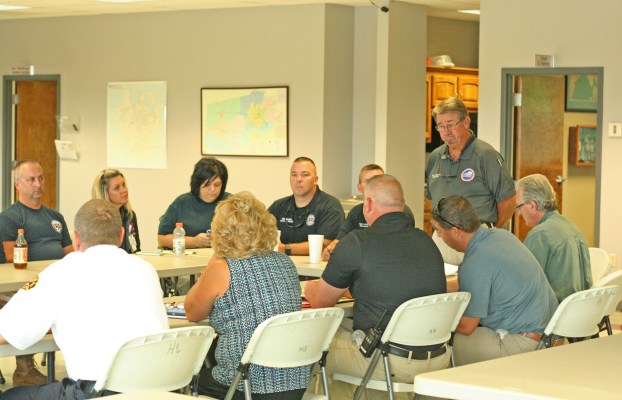 Kendra Peek/kendra.peek@amnews.com Mike Wilder, Boyle County Emergency Management Director, standing, leads the conversation during the planning meeting for a tabletop exercise to be held in October.

Imagine the day starts with threats of storms, which quickly give way to a severe thunderstorm warning, before turning into an F3 tornado warning, that touches down in Boyle County, leaving a wake of destruction. Now what?

More planning sessions will continue with a smaller group, Wilder said, until Oct. 17, when the full group will come together again for a tabletop meeting, which consists of bringing everyone to the table for a mock event. It will likely be one involving a tornado, he said.

“Tabletop is just exactly what it says. We sit around the table and we will put a scenario,” he said.

Wilder explained that during the tabletop exercise, they all go through the scenario as if it were playing out in reality, with one exception: they stay at the table. No lights, no sirens, and no real emergency.

The responders will, however, talk through the situation and chime in as they react, speaking as they would on a scene. Everything will sound very real, he said.

Brian Borguno, volunteer and member of the Local Emergency Planning Committee, has been helping Wilder with the scenario. He explained that the tabletop exercise, which will be held in the morning, will simulate and evening event, about 6 p.m.

Other details have not been released yet, and likely won’t, because they want responders to react as they would in the moment.

Vicki Sanderson, Kentucky Emergency Management Area 5 Manager, said it’s important to not release the full details before the events. She, too, was at Wednesday’s meeting.

“You don’t ever give the (full) scenario out. You want people to think on their feet,” she said.

Sanderson, who also evaluates tabletop and full-scale exercises at the county level, explained some of the things they look for when evaluating these events.

There are objectives set, requiring officials to think about what they want to achieve, Wilder said, which are:

• evaluating and testing inter-agency/multi-jurisdictional coordination, or how the agencies through the city, county and state work together in an emergency; and

• testing communications, to ensure that everyone is communicating well together.

Those objectives overlap with their core capabilities, Wilder said, which are search and rescue, damage assessment and mitigation, and medical triage and care.

Later on, in spring or summer 2018, Wilder said, they will have a full-scale event.

“We try to put into motion as it’s happening,” Wilder said. “You will see ambulances. You will see blue lights and red lights and hear sirens. But this is a test.”

Responders, again, won’t have a clear picture of the scenario ahead of time, but will be expected to react just as they would to an emergency.

Wilder said that’s why these events are important, to get everyone prepared for what he believes is inevitable.

“Hopefully when the real thing comes we will be able to deal with that in a manner that saves lives and property,” Wilder said. “We’ve been so fortunate in the past years that we haven’t had anything. That’s a good indication that it’s coming.”

Stabbing suspect turns himself in to police

A man who allegedly stabbed a woman in the back has turned himself in to Danville police. Justin T. Davis,... read more