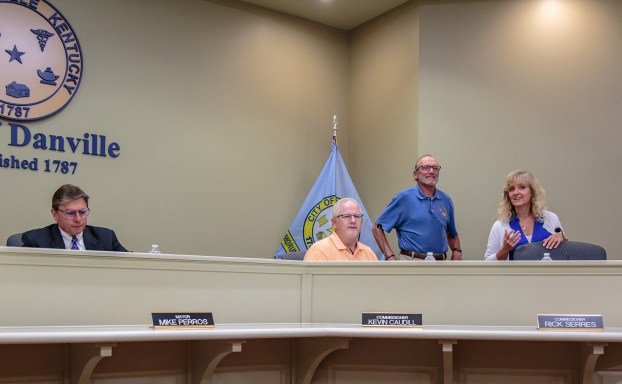 Danville City Manager Ron Scott has recommended the city withdraw its direct funding for Danville-Boyle County Parks and Recreation. Instead, Scott has proposed Danville require Parks & Rec to seek approval from his office to spend money out of a restricted account “until new agreements are reached between Danville and Boyle County” regarding the funding of parks.

Scott proposed the funding change as part of a revised 2018-19 city budget he presented Tuesday night. Danville City Commission has not yet voted on the proposed budget.

Scott explained after Monday’s meeting that he envisions a scenario where Parks & Rec leaders come to him, perhaps monthly, with a budget of planned expenses and he approves or disapproves of those expenditures.

The first draft of Danville’s budget included a $240,000 allocation for Parks & Rec; the second draft moves that $240,000 to a new “City Parks and Recreation” budget category and gives the city manager control over the purse strings.

Funds would only be released “following discussions with the city manager regarding program activities and expenses,” Scott said.

“Not a check in advance, but a discussion of how we’re doing and what we’re doing — a more engaged process, I guess, with the city sitting at the table,” Scott said. “In effect, I’m required to do that on all other expenditures through the city’s budget and this is simply putting it in the city’s budget rather than transferring it to (Parks & Rec).”

Scott’s proposal follows a decision made in mid-May by the Boyle County Fiscal Court to reduce funding for the Bunny Davis fitness center and pool, which the city owns but the county has traditionally paid 55 percent of the operating costs for.

Boyle County Judge-Executive Harold McKinney said at the time the reorganization of Parks & Rec funding could “send a clear message that we want to put our resources in Millennium Park and not in the Bunny Davis center and the pool.”

“Boyle County has recently indicated their priorities for future expenditure in parks and recreation matters will be limited to those to be made in Millennium Park and will no longer share with the city maintenance costs of the Bunny Davis Pool and Recreation Complex, or those related to city neighborhood parks,” Scott’s budget summary reads. “The city must therefore examine all alternatives in providing all parks and recreation services.” 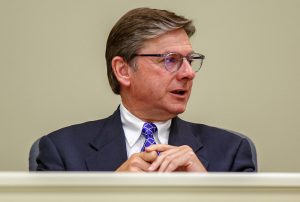 Danville Mayor Mike Perros said during Tuesday’s meeting he believes a forthcoming parks master study paid for by the city will give officials “an opportunity to step back” and “adapt” how parks and recreation in the area works going forward. (Photo by Ben Kleppinger)

Scott noted Danville expects to complete a master parks study soon, which will offer recommendations for how to improve parks and recreation offerings in the future. That study will point the way forward for the city “on a city-wide basis, and not limit planning for future needs or investments to just Millennium Park,” according to Scott’s budget summary.

“You’ll recall that Boyle County declined to share the cost of that study, even though we requested that they do so,” Scott said. “… In recent years, the city has made significant … capital improvements in just Millennium Park, including the amount of $457,971 in our energy upgrades that are underway, that will provide more efficient lighting and (other improvements). These are expenditures again that the city is making and we have not asked the county to participate in those. Maybe we should … the point here is that we have invested significantly in Millennium Park.”

Scott said there are “needs outside of Millennium Park that we have not previously addressed.”

An additional $100,000 would be allocated for capital improvements in “all parks” and another $140,000 would be allocated for “neighborhood parks capital improvements.” Scott said the $140,000 comes from funds the city has saved over several years, intending to use that money to help replace or repair the aging Bunny Davis pool.

The first draft of the budget included a $50,000 allocation for capital improvements specifically at Millennium Park, the spending of which would have been overseen by the city-county Millennium Park ad hoc committee. Scott has apparently recommended eliminating that funding in favor of the $100,000 restricted fund for improvements in “all parks.”

Scott and City Commissioner Denise Terry have both commented this month that the ad hoc committee may be nearing the end of its useful life. The committee is set to stop meeting at the end of June. Committee members voted in mid-May to recommend extending the life of the committee through December, but that recommendation would have to be approved by the fiscal court and city commission for it to take effect.

Scott’s proposed budget also still includes $358,600 for various trail and park capital improvements, including completion of the Henson Trail, addition of a “small neighborhood playground” at Henson Park, erection of a gazebo at Millennium Park and completion of the “spiral water splash pad” at the Lexington Avenue park outside the water treatment plant.

Commissioner Rick Serres noted the total allocations for parks in the proposed budget is $838,600.

“That’s quite a bit of money, so I think we’re making a good investment in Parks & Rec,” he said.

DCA grads are challenged: ‘Remember this’

Twelve students reminisced on their years at Danville Christian Academy at the school’s commencement ceremony on Saturday at Indian Hills... read more