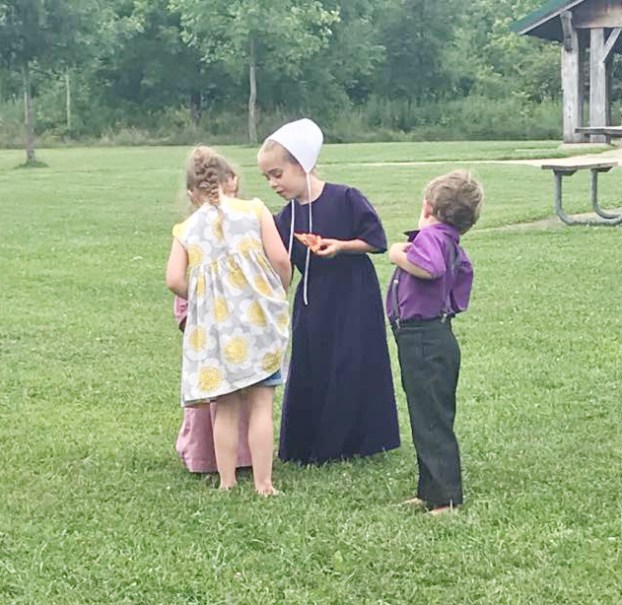 Gloria, what would be your thought about packing up and going to Ohio for a couple days?” It was my husband Daniel with one of his brainstorms. “We have some furniture that needs to be sent to Ohio this weekend, one way or another, maybe we should just hire a driver and all go rather than shipping it with a freight company.”

“That sounds like a neat idea,” I said, as my mind flashed toward the two six or seven-hour trips and everything that goes with long distance traveling with a family of five pre-scholars (Editor’s Note: the Amish term for student is “scholar” so the term pre-scholar refers to what would be known as pre-k), but then also how nice it would be see his family again. Then out loud I responded, “If that is something you would like to do I’m all in!” I liked traveling, though I have found it a bit challenging with so many little ones, but then I knew that Daniel will do awesome with the children along the way. 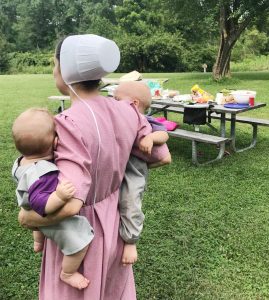 Gloria holds baby Elijah and Jesse at a picnic with her editor.

“We wouldn’t tell anyone except my sister Mary and surprise everyone else,” he plotted. I loved to see his excitement. After all, he was the one who moved away from his family when we got married eight years ago. Before finalizing our plans there were a couple things we needed to check out to see if it would work out, including hiring a driver with a van large enough for all seven of us to fit in. By mid-afternoon everything looked clear. By this time we were all excited about the thought of all packing up and surprising Grandpas.

“I’ll keep everything as simple as possible,” I told Daniel. “I’m going to see how it works to just fold and stack all our clothes into one large tote rather than all using separate suitcases, then when we get to Grandpa’s basement where we’ll stay for the night, I’ll hang up the dresses and shirts and spread out the rest on the table.

A day later we were on our way, and things were going amazingly well. We were delighted for the chance to spend some time with my editor, Kevin Williams, and his family at Carriage Hill Metropark in Dayton, Ohio where they brought along a yummy picnic supper of pizza, fresh melons, cookies, salty snacks, and drinks.

After a while, it was time to get back on the van, and everyone buckled up once more. By 8:00 we were getting wound up with excitement as we neared Grandpas. The best part was just around the corner. Directing our driver to stop behind some trees where we couldn’t be seen from the house, we slipped off the van and sneaked up close to the home using trees for cover. As we neared the door, I whispered to Daniel, “You go first!” I followed right behind along with Julia and Austin. The scene was set to perfection as Daniel, and I burst into the kitchen carrying the three little ones and found Mom and Dad sitting at the table. At that moment they caught sight of us. Yes, it really was worth the efforts of keeping it a surprise as we feasted on their exclamations of delight in seeing all of us!

The days that followed indeed proved to be excellent memory makers as Daniel went with his four brothers and Dad on a roofing job. In the meanwhile, I was in the house with my mother-in-law and sister-in-law catching up on all kinds of news and filling them in on the latest details about our two foster children. We are so blessed to see them bonding with our foster children, it is a double blessing when being away from home and needing an extra hand every now and then. The children all had a wonderful time as they took swing rides, had special snacks, and did all kinds of special activities at Grandpas.

Imagine how delighted and unworthy I felt when they told us we can have some peaches from their orchard! Not only did they share them with us free of charge, but also helped peel and cut them up for the freezer! Wow, I came home with 24 quarts for our family to enjoy straight from the freezer or in smoothies. I thanked God once more. How marvelously He supplies for all of our needs!

One highlight for me was meeting a gentleman who has fostered over a hundred children. Indeed they have gone above and beyond to reach out to children needing a good home unselfishly! It was inspiring to just talk with someone who has seen it all and knows all about that challenges as well as the joys that go with doing foster care. As for our little ones, no one knows the outcome, though it doesn’t look like there is a chance for them to return to their birth parents in the near future. It’s like we tell the birth parents, we want to do all we can for them as long as they are at our house and treat them as one of our own.

On Sunday we had the opportunity of going to church with Daniel’s family. It was quite special for Julia and Austin to go with their cousins to Sunday school class, and it really put the icing on the cake when their beloved aunt Mary happened to be the class teacher! After class, they both came back to me beaming, with stickers and a baggie of snacks.

After returning to Grandpas, we had their traditional Sunday noon menu of oven-baked omelet and pancakes. It was oh so good, served with real maple syrup, peanut butter, blueberry pie filling, and whipped topping. Glasses of cold orange juice complimented it perfectly.

Right after lunch, I finished packing up everything before we all loaded up and were ready to bid them farewell with our usual goodbye hugs. Soon we were on our way with five sleepy children who were all sound asleep before long, leaving Daniel and I with some quality time together as we discussed the trip. We decided that our time together is genuinely more important than taking naps and catching up on our loss of sleep from our late nights spent with family.

Perhaps you would enjoy trying out our baked bean recipe, similar to what my sister-in-law made for a picnic during our stay in Ohio.

1 can butter or lima beans

1 can pork and beans

Start cooking bacon, but don’t brown completely. Add onion, sugar, catsup, mustard, and liquid smoke. Heat, then pour over undrained beans. Mix well and bake at 325 for 1 – 1 1/2 hours. In our way of thinking this is best when cooked over a fire rather than baking in the oven! Also, if desired, you may cook your own beans rather than buying the canned ones.

DBCHS Pets of the week, August 21

By BARB BEANEY Contributing Writer Our featured pets for this week are Natasha and Mylo. Natasha is an elegant five-month-old... read more