Question: Hello Jerry, My father brought this plate back from somewhere in Germany when he was on tour during World War II. He told me that it came from a factory that had been bombed out. He said it once had a frame that surrounded it, but he had to break that off to put it in his knapsack.

It has several stickers and marks on the back. But we’re not sure what all of them mean. I did some research on it. Could this be an original Albrecht Durer? Thanks for your time in looking at this piece.

Answer: What a beautiful piece and a great story. I’m glad that your father was able to save it. You’re right, this piece does have a lot of stamps and decals on the back. One that set the story for me, was the one that says “Rosenthal.” 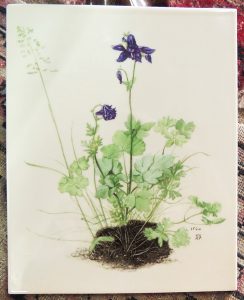 What you have is a porcelain plaque made by one of the most respected porcelain manufacturers in Germany. The company has a sad and complicated history.

Rosenthal started as a family business in 1879. Phillip Rosenthal moved his business from North Rhine Westplalia to Selb in Bavaria. In the early 1900s he bought out several other well-established porcelain houses, thus greatly increasing his empire.

I’ll not take the time here to explain, as it’s very lengthy, but in 1934, everything went sideways. Phillip was a Jew and he was asked to withdraw from his own company — the company that he had built! There is a lot about Phillip’s voting rights, the Nazi party and the world market that Rosenthal has created for the Germany economy. Trust me its complicated.

In 2009, the company was sold to an Italian group named Sambonet Paderno Industrie. I urge you to do more investigation if you want a real story of how WWII affected a German global business.

Enough of that. You have a plaque and not a plate. As best as I can tell, it dates to about the 1920s. It’s not an original Durer. Quickly, Durer was a German painter and printmaker in the 14th Century. He was a master then and is still regarded as a genius. Needless to say, his work, like in this piece, is often copied and reproduced all over the world. This is one of his examples. That one decal translates from German, to read, “Columbine from Albrecht Durer.” It is hand-painted, is wonderfully rendered and is almost lifelike.

It’s a shame the frame didn’t survive too. That would have really set the whole thing off. It lacking its original frame hurts the value, but you can find a good frame at a local frame

gallery. Though it’ll be modern, it will only help the appeal and appearance of your fine plaque.

I found only a few floral plaques in the market. I’d expect that this unframed plaque would have a price tag of about $300 on it at a fine antiques show. Thanks for sharing it with us.

Jerry Sampson is owner of J. Sampson Antiques, Books and Appraisals on Main Street in Harrodsburg. He has been an accredited senior appraiser (ASA) in the American Society of Appraisers since 2009.

To request an appraisal, send clear digital photos, detailed descriptions, measurements and condition to jsampsonantiques@bellsouth.net. Only one item per person. Items will be selected on an individual basis and may or may not appear in print. No coins, money, stamps, weapons or sports memorabilia will be considered. No emailed photos or information will be kept.

Information discussed in Personal Effects is not intended to be a substitute for an in-person appraisal of an item. Exact valuing can come only from actual viewing. Jerry Sampson, J. Sampson Antiques, Books and Appraisals, The Advocate-Messenger and its staff cannot be held responsible for misinformation or incorrect estimates. These featured appraisals are intended for entertainment purposes only and are not valid for insurance coverage or estate settlement.

From our files, October 27

100 YEARS AGO — 1918 Some excitement was caused in Danville at noon today when the fire department was called... read more