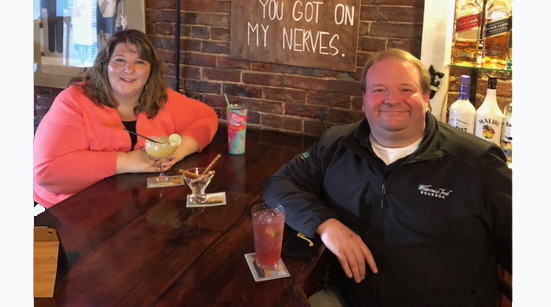 Alex, right, and AnnYager Hamlin McCrosky get set to do one of their latest “Happy Hour with Alex and AnnYager” from the Harvey’s restaurant dining room. The live event is offered every Friday night, something the owners decided to do in order to stay connected with their customers. (Photo submitted) 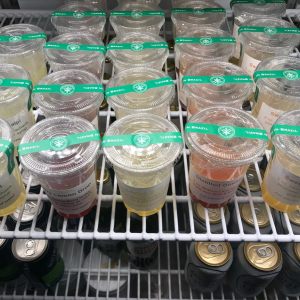 Premade cocktails line the cooler at The Still. Many local restaurants were able to morph into offering premade specialty cocktails, which they say has taken off. (Photo submitted) 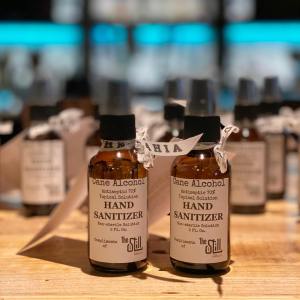 The Still at Ambrabev created their own hand sanitizer, which they offer as complimentary to all of their carry-out or delivery customers, as well as donated to area agencies. (Photo submitted)

Editor’s note: This is the second of a four-part series about life during the COVID-19 pandemic.

The best way to put it all into perspective is to say “there’s been a lot of moving parts for this, for all of us,” says Harvey’s co-owner, Alex McCrosky, about working to remain a viable business during the health pandemic. Harvey’s is one of the many local restaurants that has had to completely revamp how it provides its service to the public in order to stay afloat.

Dining-in options have been closed since March, and many restaurants transitioned over to delivery, curb-side pick-up or carry-out. Many began only taking credit card payments over the phone. Some got on the bandwagon of offering pre-made, house special cocktails to go and bottles of wine at cheaper prices.

Waking up and shaking up

But it all didn’t happen overnight, and took lots of logistical work, along with safety precautions, in order to connect all the dots.

To top it off, McCrosky was in the hospital when the shut-downs began due to the COVID-19 pandemic. He had quadruple heart bypass surgery a month-and-a-half ago.

“I’m on the mend, but still get tired pretty easily,” McCrosky says. He says quadruple bypass surgery “is not for sissies, trust me.”

McCrosky says when Harvey’s is in full-force, they employ up to about 24 people. “That Monday night when Gov. Beshear shut everyone down, I had 24 people standing around holding their hands, not knowing what to do. We had to act quickly.”

But, he says as tough as it’s been on restaurant owners, “it’s been tougher on our employees. They had to make the decision on whether to go on unemployment or try to stick it out, but at that particular time, nobody had even heard of the paycheck protection program.”

McCrosky says they are “blessed to have people who really want to work. A lot of businesses are finding that they can’t give their employees a lot of hours, but they have to put food on the table at home, too …”

McCrosky says they had to make a lot of decisions, and fast. “Some had children at home. We had about six people who opted to stay, still working with us now.”

He says that after a few calls to Johnson and Pohlmann Insurance, finding out if the restaurant is even insured to offer delivery and how to do it, they began delivering daily. “But that didn’t work, so we pivoted, and just started delivering on Friday and Saturday nights, when we had the most demand. Quite frankly, our business model isn’t for delivery. We had to make this thing work.”

And so far, the 10 p.m.-midnight delivery time offered every weekend has provided “a pretty good revenue stream, especially when they gave us the ability to sell cocktails to-go.”

McCrosky says Harvey’s has been selling “a lot of margaritas by the half-gallon,” which is only allowed when patrons also order food.

Which also took some morphing to decipher exactly how to achieve, he says. “The cocktails happened very fast … We made the decision to use the cups we have and to seal them up, very quickly. That’s morphing a little bit. And we’re selling our sauces, too. We had no idea the demand for our sauces and dressings, so we’re bottling it up and selling it left and right.”

That includes a finishing sauce they are now bottling, which can be used on pork, salmon or chicken as a marinade.

As for the alcohol to-go, McCrosky says, “That’s something I hope out of all of this sticks around. It’s super-convenient, especially with the lake life here. We hope the Kentucky Restaurant Association considers taking it up; I certainly would vote for it … If you trust us enough to serve drinks across the bar, we hope you trust us to deliver them.”

Harvey’s also took its social media presence to another level, McCrosky says. Every Monday night, he and wife AnnYager do a Facebook Live event beginning at 7 p.m. — “Cocktails with Alex and AY,” they call it.

“When you own a place like this, not only do your customers miss you, but we miss our customers. We thought even if we had two or three regulars watching, it’d be worth it.” On a recent happy hour event, the couple had 4,000 views with about 40 watching the event live.

“It’s easy to do, we just talk. People are engaged at the bottom of the screen, so we acknowledge folks when they join in, we tell stories. We enjoy it,” he says.

McCrosky says when you operate a certain way for a certain amount of time, you get comfortable. “Which is a bad situation for any business to be in. If you’re not moving forward and changing, you’re dying. We’re all about the changing part, but there’s still practices you get comfortable with, and that’s where we were. It’s taken something like this to wake us up and shake us up.”

They’ve had time to try out some new things in the kitchen, he says, “but there’s not much money for us to do anything really new and special right now, but we’re trying every week to do at least one new thing.” Coming up, Harvey’s plans on offering family dinners, enough for four or six, with some of the easier meals, like brisket.

He thinks Harvey’s will be at about a 15% occupancy level to start with, then “we’ll ramp up as we need to.”

But, it’s been hard, McCrosky admits, through his positive outlook. “Even coming back will be tough on us, because now we’re conditioned to this. It’s going to be really, really hard to readjust. But we will. Everybody will.”

But, he says, the community has been more than generous during this time, supporting local businesses. “We don’t have a lot of money in the bank, we’re not like the chains. The corporate office is right here at the bar and at my kitchen table. Without the customers’ help, we’re in a bad spot. But they’ve shown up for us to help at least break even during this.”

McCrosky says he hopes the local support continues after the pandemic is all over.
“When this thing first started, I said we’re going to make it about a month. Not that we’d quit, but we can’t spend $3,000 a week on food and the labor … But we figured it out, somehow or another. God’s been good.”

“Mainly, during this mess, we wanted to fill a need in the community.  That started with the hand sanitizer, but it also continued with family meals,” says Elsa Wachter, general manager for The Still at Ambrabev. “We knew that since people weren’t getting out to grocery shop a lot, there was a need for larger meals to warm up at home for a change of pace.”

Wachter says she and Chef Savannah Ray put their heads together when the COVID restrictions began. Before the dining room service was stopped, they had already begun responding to the industry information provided to adjust the business, such as separating tables and having the servers wearing gloves.

“Cassie (Baeker, social media coordinator) had mentioned to Tom (Baeker, an owner) at the beginning that we should make our own hand sanitizer and shared some ideas with him … that took off!” Wachter says, and the distilled spirits company donated its sanitizer to many area agencies in need.

“I am a quilter, and we immediately made masks for delivering curbside or to houses,” she says. And, The Still had been attempting to push its to-go and delivery lunches to businesses since January so they were fortunate to have all the containers when the restrictions tightened, and some products were in high demand and hard to come by.

Wachter says curbside and delivery took about a week to get in order, using the Hazard Analysis Critical Control Points to determine The Still’s weakest links in the process in order to improve them.

“We have found that the least amount of contact is possible through credit card payments over the phone. This keeps us from taking anything back into the restaurant, and of course we deliver the food with fresh gloves and wearing a mask every time.  We have really been reinforcing changing gloves between orders and anytime you finish with one customer, touch the door, etc..”

The Still made sure to offer some “cheesy pastas and comfort food, but we have some really great healthy options with fresh vegetables, too,” Wachter says. She says the family meals really took off, and are planned to be offered on a weekly rotation once the dining room reopens. They also plan on having a “more dynamic” gift shop with their bottled cocktails and family meals in a refrigerator cooler for anytime-pick-up.

But, when it all began, Wachter says she had the biggest problem with getting fresh product on time. “All our vendors had cut out some of their delivery days and we can tell some produce had been sitting longer than desired, plus they change the drivers and routes more frequently now, so delivery times are unpredictable,” Wachter says. “Luckily, the companies have been accommodating, and the delivery drivers are so kind.”
Wacher also says The Still appreciates its customers, who she says have been “so incredibly positive, supportive and kind. It has been utterly amazing to see that side of people, and they’ve been so generous to us — and others, as well.”
Coming up — check back to see how some area college students are handling all online classes.