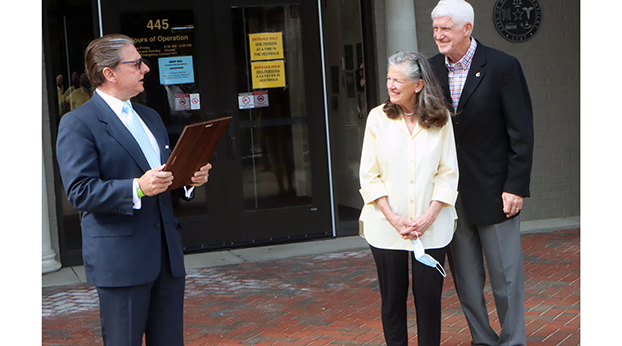 John and Susie Roush have served as president and first lady of Centre College for more than 22 years, and as they head into retirement, city officials decided to hold a ceremony to recognize and honor the couple before Monday’s Danville City Commission Meeting.

Danville Mayor Mike Perros presented both John and Susan with proclamations recognizing their efforts and dedication to not only Centre College, but to the Danville community as a whole.

“I am forever indebted to the people who gave me a chance to work down the street and for the people, many of you here today, who chose to love Susie and myself,” John said. “… It’s been a joy and it’s been a blessing.”

Susie added that she is grateful for the love that has been shown to them from the community during their time at Centre.

The Danville City Commission presented Susie with a bouquet of flowers and presented John with a painting of Crounse Hall on the Centre College campus. A large statue of former U.S. President Abraham Lincoln stands outside Crounse Hall, and Perros noted that John really enjoys studying Lincoln, making the painting a perfect gift.

Over the years, Danville has become home for John and Susie. While they aren’t natives of Danville, they plan to remain in the city during their retirement, although John said the couple wants to spend more time with their children and grandchildren in Richmond, Virginia, and San Jose, California.

“We are looking forward to spending more time with our two sons and two daughters-in-law and our six grandchildren,” Susie added.

Perros recognized John and Susie during the Danville City Commission meeting later that evening and John led the prayer to begin the meeting. He and Susie also led the commission in the Pledge of Allegiance at the beginning of the meeting.

A regular audit of the Boyle County Sheriff’s Tax Settlement by the state auditor’s office came back clean with no... read more