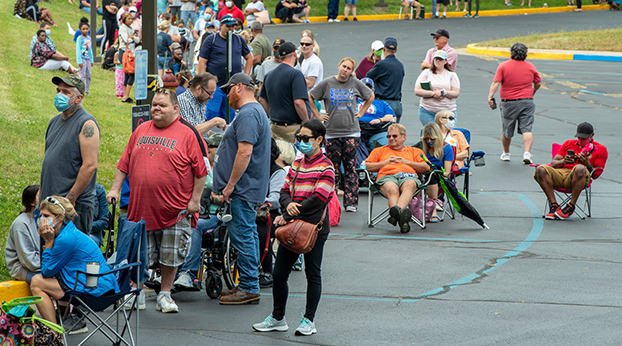 This file photo from June shows a line of people seeking unemployment compensation at the Kentucky Cabinet for Health and Family Services building in Frankfort that stretches down a service road and doubles back into an adjacent parking lot. Claimants were divided into two lines. (Kentucky Today/Robin Cornetet) - File photo

The Kentucky Labor Cabinet released more details on Saturday about the three locations where Kentuckians who have had issues resolving their unemployment claims during the coronavirus pandemic can go and how to set appointments.

Beginning Monday, in-person unemployment insurance assistance will be available to claimants in Frankfort, by appointment only, at the Mayo-Underwood Building located at 500 Mero Street. That’s the new state office building located on what was the site of the Capital Plaza Tower.  The appointments will continue until further notice, Monday through Friday from 8 a.m. to 4 p.m., except for state holidays.

In-person unemployment insurance assistance will be available by appointment only on Monday and Tuesday in the Ashland and Owensboro areas during the hours of 9 a.m. to 6 p.m., local time. The Kentucky Community & Technical College System will be hosting the events at the following locations:

Claimants must bring two forms of identification like their driver’s license or other photo ID and social security card for identity verification.

Appointments can be made at kcc.ky.gov and going to the “In-Person UI Services” View Services button.

Kentuckians who need additional assistance with their unemployment insurance claims can also visit kcc.ky.gov and use the Chat Now button or call (502) 564-2900.

“We acknowledge the frustration that has been involved with unemployment insurance,” Josh Benton, Deputy Secretary of the Education and Workforce Development Cabinet, told a legislative committee on Friday.

“There’s been nothing more frustrating over the past three or four months than not being able to get these claims through as quickly as we would like,” he said.  “We are sympathetic to those frustrations and we recognize them as well.”

Initial claims went from 2,463 the first week of March to 113,149, the last week of March, and the federal government increased the types of unemployment available, the combination of which overwhelmed the system.

From the first week of March to the first week of June, “There were over 8.4 million calls into the call center, “Benton testified.  “It’s trending downward as the claims go down, but at the peak we were close to 300,000 calls per day.”

The number of unresolved cases since the pandemic began now stand at 6,700 from March, 25,000 from April and 17,000 outstanding claims from May, Benton said.

The appointments are necessary, to avoid the long lines from earlier this month in Frankfort, where people waited for ten hours to see an adjudicator, and in some cases had to come back a second or third day.