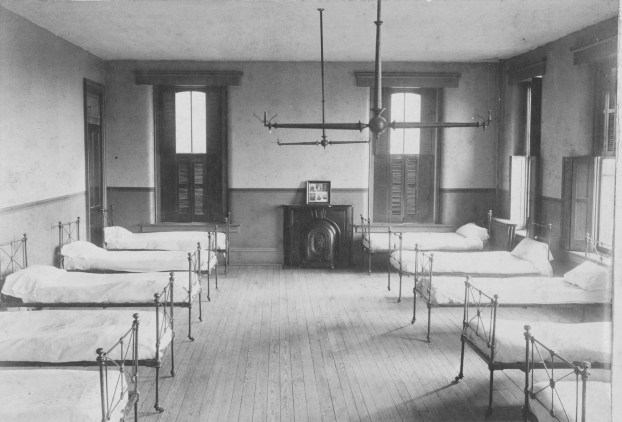 The campus infirmary was located on the third floor of the “big boys’ building (later Dudley Hall). Many of the students who were sickest were nursed here. Dudley Hall, on the corner of Green and Second Streets, was razed in 1970 and the new elementary building, Walker Hall, was built on the site.

The Spanish flu at Kentucky School for the Deaf

The Summer and fall of 1918 was a devastating time for most of the world, as the Spanish flu killed millions of people. Kentucky was not immune.

The disease took its largest toll from September to December 1918. According to the Louisville Courier-Journal, 14,000 people died in Kentucky, hitting Louisville and eastern Kentucky especially hard.

State and local authorities acted quickly to slow the spread of the disease. On Oct. 7, when 25 cases of the flu appeared in Danville, the local board of health quarantined sick residents. That same day, the state board of health closed theaters, schools, and churches. They also banned public gatherings and prohibited people “from visiting each other’s homes.”

The Kentucky School for the Deaf had reopened for the 1918-19 session on Oct. 2, two weeks later than usual, according to the Kentucky Standard, the in-house newspaper for the school.  The delay was caused by war-time conditions.

“Chaperones were on the various roads as usual to meet the pupils and all reached here safely. The number of new pupils is unusually large, but as there were 20 graduates last June and others reached the limit of time allowed them, the number of pupils present at the first roll-call was about the same as last year, a little over 300,” according to the newspaper. 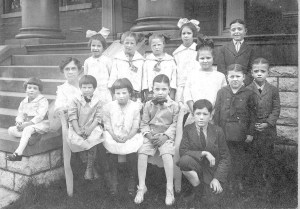 An unidentified group of young KSD boys and girls posed with their teacher on the steps of the “little boys’ building”, later named Gallaudet Hall. Their clothing and tentative smiles indicate that they are new arrivals on campus in the late 1910s. The photographer was Max Marcosson.

The Kentucky Standard editor (George M. McClure) noted that the Oct. 31 issue was the first issue for the 1918 school year. “We have just passed through a severe epidemic of Spanish influenza that made necessary the suspension of all school and shop work for over two weeks. The disease had just begun to make its appearance in Kentucky when school opened. One of the new pupils from Covington was found to be ill on her arrival and our physician pronounced the disease influenza. Others had been exposed to it. Ten days after opening it had secured a foothold.”

“In all we had about 200 cases though the majority were mild. Ten of them however developed into pneumonia from which two deaths resulted. The first victim was Ray Cassell, of Louisville, 10 years of age, who was in his third year at school. He was a bright little fellow who made excellent progress in his lessons and was a general favorite. A sad feature was that his parents could not be located over the wires in time to come to see him before death occurred.

“The other death was that of Ruby Tillman of Bowling Green, a member of the First Class and one of our most loveable girls. She was 17 years old and when she returned to school a few days earlier was the picture of health. Her death was a great shock to everyone here. Her father was sick in bed with the disease himself when the summons to his daughter’s bedside came, but her mother was with her at the end.”

All staff members remained on campus to care for the severely ill and help with the recovery of two-thirds of the student population as the epidemic ran its course at the school.

Because the school was under a quarantine order, KSD pupils and staff  were confined to the campus and did not infect the rest of the population of Danville.

(Editor’s note: This is the second part of a two-part article that continues the story of Ernest L. Sampson, a... read more