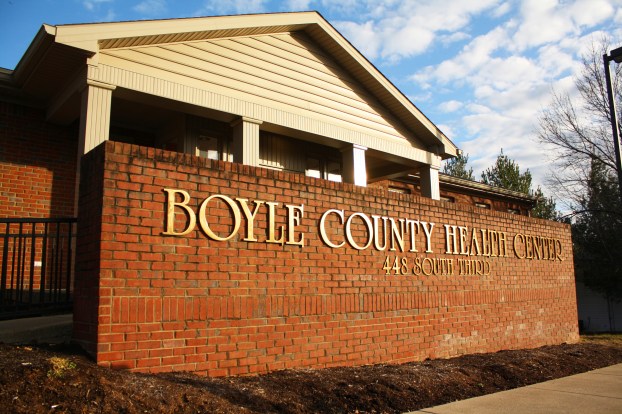 A mobile unit, giving out free Naloxone kits, HIV and Hepatitis C testing and counseling will be in the parking lot of the Boyle County Health Department on 448 S. Third Street on Feb. 17 from 11 a.m. to 3 p.m.

The Boyle County Health Department is immediately hiring two COVID-19 contact tracers, which will make a total of four tracers who are tracking the pandemic in the county. However, the positions aren’t being added because there’s an enormous spike in virus cases right now.

Only one of the two tracers will be an additional worker, while the other tracer will be hired to replace one who took another job, said BCHD Executive Director Brent Blevins.

The local health department has been using two contact tracers for about a month and a half, Blevins said. And about two weeks ago, he added a third tracer position.

With the possibility of more positive COVID-19 cases being reported once schools begin and more businesses open, Blevins said he made the “business decision” now to increase the contact tracing staff.

Blevins said the structure of how contact tracing operates is that one person is the initial contact for the health department, and the other three tracers make the daily texts and phone calls to people who have come into contact with someone who tested positive for the virus.

The state pays for the contact tracing positions so he asked for another contact tracer for his department so that the process can be more efficient as the contact numbers increase. And, “so that these people don’t burn out.”

Blevins said each contact tracer carries a minimum workload of 10 to 15 families, but at one time that number reached 30 cases.

He explained that a workload of 10 cases, which averages six people who have come in contact with the person who’s tested positive, “that’s 60 calls a day” that have to be made everyday for two weeks in order to monitor their condition.

About a month ago, one of the contact tracers was following a case with 40 contacts, in addition to their other workload, he said.

“Some of those people are not happy that you’re calling them,” Blevin said.

LEXINGTON, Ky. (KT) –  The University of Kentucky has unveiled plans for testing up to 30,000 students for COVID-19 as... read more