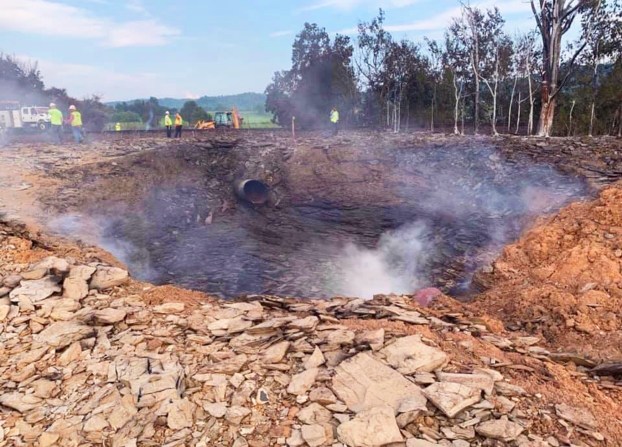 A photo of the massive crater left in the ground in Lincoln County after the gas pipeline explosion was taken by hazard materials specialists who assisted on the scene.(Photo courtesy of Somerset-Pulaski County Special Response Team)

A civil lawsuit against companies involved in the Aug. 1, 2019 gas pipeline explosion in Lincoln County, along with a local compressor station operator, was filed yesterday in Lincoln Circuit Court on behalf of 87 plaintiffs who were affected by the blast.

The lawsuit states that the local compressor station operator, “is a necessary party to this matter because it is believed that his/her negligent, grossly negligent, wanton and/or reckless actions contributed to plaintiffs’ injuries and damages.”

The complaint states that construction of the pipeline began in the 1940s and is about 9,000 miles long “which moves approximately 20% of all natural gas in the United States” from Texas and Louisiana  through Mississippi, Arkansas, Tennessee, Missouri, Kentucky, Illinois, Indiana, Ohio and Pennsylvania to the New York City area.”

Three lines run parallel through central Kentucky, including Lincoln County “and there are numerous compressor stations along the entire length of the pipeline, one of which is located in Danville.”

The pipeline failure and explosion that occurred in Lincoln County on the early morning of Aug. 1 created a crater about 50 feet by 35 feet and was 13 feet deep.

The complaint states that the personnel at the Danville compressor station, “eventually, and after delay, closed the pipeline discharge valve north of the failure site, and other personnel, eventually and after delay, later closed a valve elsewhere on the line.”

It goes on to state that the explosion, which caused one death, several injuries and severe property damage, was “due to the reckless, wanton, negligent, and/or grossly negligent

conduct and/or omissions of defendants.”

It also states that the pipeline failure and explosion that happened in 2019 occurred about 10 miles from the site of the Feb. 21, 1986 explosion.

Sharing the ‘African-American Experience in Kentucky’

Chuck Taylor had a unique reaction to the Black Lives Matter movement. He says that a few weeks ago, when... read more