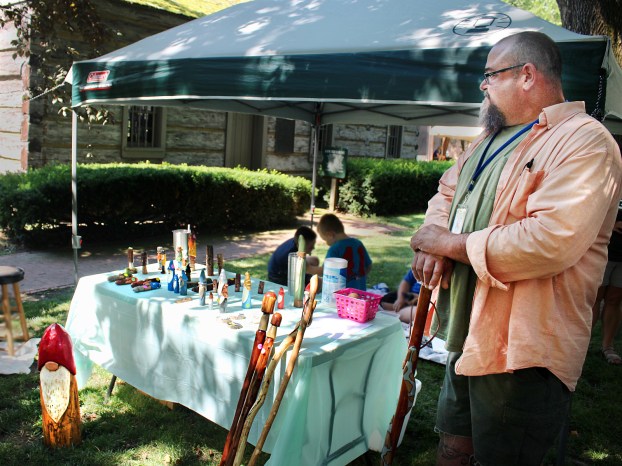 Christopher Hubbard whittles gnomes and walking sticks which he sells at the Boyle County Farmers Market on Saturdays. (Photo by Emily Smith)

Faces of our Farmers: Christopher Hubbard

Meet Christopher Hubbard, the artist behind Creekside Creations who can be found at the Boyle County Farmers Market on Saturdays.

Hubbard started carving wood pieces about a year and a half ago when he found himself bored at home during time off work.

All of the wood he uses for his craft is gathered locally, mostly on nature walks that he takes. Hubbard never cuts a live tree for his creations. Instead, he looks for fallen trees, which are usually cedar or fruit trees, like peach and apple. 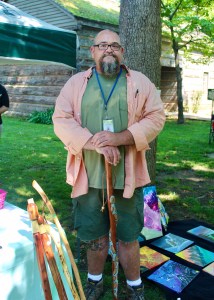 He carries the wood to his front porch and carves it with his favorite pocket knife, “An old red bone handled Old-Timer pocket knife,” which he bought in the 1980s, he said. He’s taken this knife while camping, hunting, hiking, and it’s likely tucked inside his pocket when you drop by the market.

The whittling blade has been used so much it’s worn down from its original form into the perfect shape to carve tiny bearded gnomes. So yes, Creekside Creation’s wooden pieces for sale at its booth at the BCFM are local through and through.

Hubbard credits his Appalachian roots in folklore which inspires his work. His ancestors came from North Eastern Europe, so he grew up hearing both Appalachian tales and stories from the Germanic and Scandinavian tribes of his ancestors.

His carved walking sticks are truly special. The community has apparently caught on, because he continues to sell out of these one-of-a-kind pieces.

As for the gnome caricatures, Hubbard says, “You can’t look at a gnome and not be happy. There’s not a bad gnome out there.”

His handcrafted, whimsical gnomes are happy little fellas and they are meant to bring a smile to your face. If you’re lucky, you may see a desk tiki – those little guys can give you the stink eye. Just ask Hubbard.