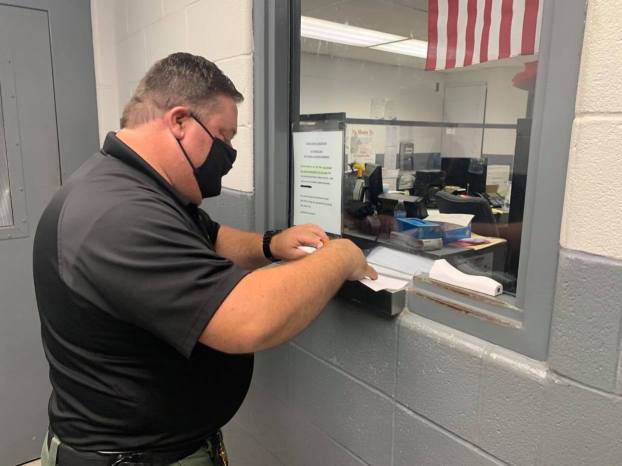 Jail goes on lockdown due to inmate with COVID-19

Health director said jail doing everything right, with what they’ve got to work with

Although the Boyle County Detention Center confirms it has one inmate who has the coronavirus, the jailer says it’s not an outbreak. Which, even at one person, still creates a space problem for the jail due to how it’s laid out, Brian Wofford explained — something they must prepare for.

Wofford said the person was brought in and booked early Tuesday morning, around 2:30 a.m., and notified jail staff afterwards that they had tested positive for the virus.

Wofford said if there is no relief for the situation, meaning arrests continue to come in while they are trying to find a space solution, “We’d have to shut the jail down, like Scott County did. Local agencies would have to house the inmates in other counties, and we don’t want to do that. I want to avoid that — I don’t want to put that hardship on other agencies.”

But, he said, “We’re close to that happening. It changes minute by minute, and right now we’re full.” Wofford said the jail probably has about eight isolation beds open.

Not all ‘cut and dry’

Boyle County Sheriff Derek Robbins said the three deputies who had been in contact with the inmate prior to booking are all on leave. “They went in and got tested, but of course all tested negative because it hasn’t had time to incubate,” he said. They will be off for three days, and will be tested again before they can return to work, hopefully by the end of the week.

Mercer County Sheriff Ernie Kelty said after doing some research, he felt comfortable with his two deputies remaining on the job. He said one of the two arresting deputies never had direct contact with the person, other than handcuffing them, and that the arrested person was wearing a mask during this.

Kelty said he spoke to the Mercer County Health Department about the issue. “And he was not within six feet (of the arrested person) other than when he handcuffed them, and was never facing them. As long as he wasn’t within six feet for 15 minutes or so, (the health department) said we need to monitor both of their temperatures,” and to take action if they began showing any symptoms. 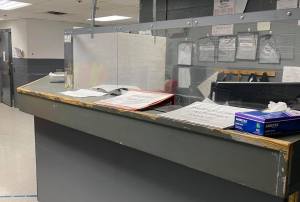 Boyle County Public Health Director Brent Blevins said, “Yes, if you’re within six feet for 10 minutes or more, that’s our definition, if you didn’t have a mask on and in close proximity … Those are the people we’re looking at for quarantine besides the positive person.”

He said he tells people, “Hey, if you’re going to be within six feet of anyone, throw a mask on. You’re so much less likely to be quarantined, then, just because you were around a positive case.”

He said but then you throw in certain jobs, “like healthcare, law enforcement,” who are essential employees, and these agencies “can’t just put everyone off because they had a positive case, or a couple. We have to make a determination, like Mercer did — the proximity, if they had a mask on, they weren’t right in front of them … If you put this whole crew off, it can put a hardship on many essential services. Healthcare is the same way.”

Blevins said a lot of investigation and thought goes into these situations, they’re not all cut and dry.

As soon as the Boyle jail staff knew the new inmate was positive for coronavirus, they began isolating inmates for no contact with others.

“We made sure all of our staff dealing with this inmate have the plastic face shields, gloves and gowns. We went through to each cell and notified everyone (of the infected inmate) and offered them masks,” Wofford said, which means “we’ll burn through our masks faster, but we want them to feel safe and be protected.” 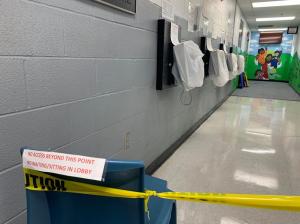 The jail has gone back to a lock-down situation, meaning inmates are not able to go to rec in the outside area and other groups, like the GED classes. “We will still be doing court, we contacted both county (Boyle, Mercer) attorneys and judges who will help us with getting people out.”

Wofford said they do have isolation cells, but currently have five inmates in them, on high-risk suicide watch. “So we’re running out of places to quarantine people. So the county attorneys and judges will work with us to help us manage that, and we’re very grateful for it.”

Wofford said in an attempt to help with the crowding situation, they will be suspending those who have to serve weekends only. “We’ve agreed to suspend that if we get through this, so it doesn’t use up our isolation cells.” Those who come in for weekend sentences are put in different cells so they are not mixed in with the general population.

Video court is still being held, with added precautions.

“We’ll bring a group in, spread them out, then we have to disinfect the room afterwards, wait 15 minutes for the cleaner to work, and bring in another group …”

Health Director Blevins said he went on a walk-through some weeks back at the jail.

“The problem with jails, and ours is no different than a lot of them, they’re just limited in space.” He said when it comes to problems, like the COVID-19 pandemic, “it’s just not great for those. What I told them was I thought for the space and resources they have, they were doing as good as they can do. Staff are even socially distanced as much as they can, but they’re just limited.”

Blevins said, “when you’ve got a jail that small … it can be very difficult.”

But, he said, staff are doing a good job. “They do great. It’s just a difficult situation to deal with, especially there, on so many levels.”

The jail also had to notify the Department of Corrections, which was going to allow the jail to start filling up its SAP beds, for the substance abuse program.

“As of (Tuesday), they were going to allow us to start moving inmates from other counties …” who they had to keep in the Boyle jail for 14 days to allow for quarantine. “And there’s other counties holding our inmates for that. Now, I think DOC has changed that quarantine time (for new inmates) to 20 days.”

So, “with this COVID outbreak, it will prolong things” even further, he said, in reference to getting the SAP program up and running again. It also suspends the GED program.

“And I think where the governor passed the thing where they will release more state inmates — I think we have 12 now — that will help us out some.”

That order, first issued back in April, will now hit its second round of early releases of inmates “deemed medically vulnerable or near the end of a sentence for nonviolent, nonsexual crimes.”

Along with returning to the “stepped-up procedures” dealing with the pandemic, Wofford said jail staff have even been going up on the roof to make sure the air intakes and outtakes are sanitized and stay clean.

“If it gets in here and it’s not managed, we’ll all have it because the way the building is laid out and the conditions we have,” he said. Staff have been advising inmates of precautions, such as extra handwashing, not sharing eCigarettes or eating/drinking after each other. Phone receivers and iPads inmates used are also being disinfected regularly.

This could also put a hurting on the jail’s budget, he said.

“We’ve ordered more masks, which we can still order through FEMA, where the federal government can reimburse us.” Wofford said he spoke to Boyle County Judge-Executive Howard Hunt earlier this week, who confirmed they still can bill for reimbursement through the federal program.

“But, those masks were $4.25 a box, and they’ve increased their prices to $18.25 a box, they did this since March. … That would kill my budget line item if we didn’t have the COVID line item through the federal government. It would completely destroy it.”

The jail is closed off to anyone not considered essential personnel. No volunteers with faith-based organizations are able to return, Wofford said. “We’re doing everything we can to protect the health of the community.”

Robbins said they will be able to manage without their three deputies for a few days, but it’s still a big part of his force.

“That’s still a whole night shift for one platoon for us.” He said luckily, they have their school resource officers who aren’t in the schools yet and can fill in.

“Now, if one or more are positive, that’s a whole different ball of wax. We’ll have to figure out what we’re going to do. I guess having guys filling in on overtime, when money is already an issue …”

A woman was found dead inside a camper that was destroyed by fire while parked at the Pioneer Playhouse Campground... read more