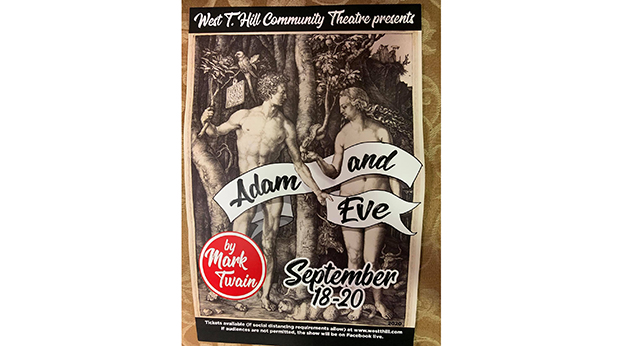 This weekend won’t be Karen Logue and Dale Kihlman’s first time partnering up to present  “The Diaries of Adam and Eve,” a humorous short story by Mark Twain. But, it will be the first time they’ve offered it as part of their Readers Theatre events at West T. Hill Community Theatre.

It’s also the first time the theater has ever had to completely reconfigure operations during a global health pandemic, which Managing Director Logue says has been a real journey, for various reasons.

“Dale and I actually did this piece together in 1991, at the Black Box Theatre,” she said.

So, since it won’t be a full-on production due to following guidelines, Logue is happy she and Kihlman have such well-established rapport with one another.

“Sometimes, people can see Readers Theatres as a little stagnant, depending on the actors,” she said. “But all the veteran actors in the world have performed this show at one time or another.”

Although they’ll be seated at a table reading it, “we’re both so familiar with it, our heads won’t be down the whole time … We will interact with the audiences; we will wait for their responses and we will respond to their responses, in-kind, staying in character.”

Logue laughed. “If someone likes what ‘Eve’ is saying, I’ll milk it for all it’s worth. And Dale is the same way.”

This will be the theater’s first attempt to open up its doors since COVID-19 hit. Logue said they can only sell 30 seats, “tops, in order to keep everyone safe and socially distanced.”

WTH worked with the Boyle County Health Department, “and with the CDC, through the state. We have the guidelines posted,” Logue said, in paper copy and online. Those include patrons wearing masks, not congregating in the hallway and only sitting within groups they’ve been interacting with during the pandemic.

Tickets will only be sold online, so no cash will be handled or exchanged. Logue said she realizes many of their loyal, elderly patrons may choose not to venture out, but she hopes others — who have been safely grouping — do.

“They can buy the tickets online, and people can sit together who have been through the pandemic together,” she said. Ushers will be on-hand to assist with making sure groups are seated in the safe distance apart, she said.

“We struggled as to whether we should even do this, but the board finally said let’s try it, with ‘Adam and Eve.’ We actually already had a full schedule lined up …” Logue said, but that’s been reinvented, with other Readers Theatres and some Radio Shows planned.

The most the theater can make with the seating restrictions is $300. But, it’s not all about money, Logue said.

“We want to keep the theater alive. We just celebrated 40 years — are we just going to close up? Can we get through this? I don’t know what Broadway is going to do. But we’re all in the arts together.”

Plus, as a smaller theater, Logue says it’s easier for them to open for limited seating than the larger venues, which she’s thankful for. “But we’re only doing it for one weekend, though, so seating is really limited.”

Logue said it was also important to her to offer something during such a tense time, since they’ve figured out how to do it safely.

“This is charming and short — it’s only an hour and a half, with a small intermission. I really think people will enjoy its simplicity, its purity …” And she loves how its author, Mark Twain, “takes the battle of the sexes all the way back to creation. It’s humorous and, yet, it’s touching.”

She said there’s no language or content to be concerned about, and she feels everyone will be able to relate to it, “on so many levels.”

Logue said a large viewing screen will also be used on stage, with the garden projected onto it. It will include some special music and lighting, as well.

“Hopefully people will be really interested in what we’re doing, and how we’re going to do it, and really just want to get out of the dang house for a night. Safely.”

“The Diaries of Adam and Eve” will go up 8 p.m. Friday and Saturday, and 3 p.m. Sunday at West T. Hill Community Theatre. For tickets, or to check out the guidelines that must be followed, visit westthill.net. No tickets will be sold at the door.