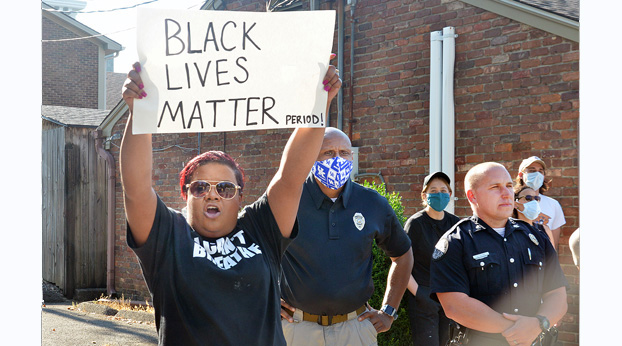 Cheryl Burton, one of the organizers of a peaceful protest in Danville earlier this year, holds a sign as Danville Police Chief Tony Gray and Assistant Chief Glenn Doan stand nearby. (File photo)

United for a Change group works to circulate demands

Members of United for Change-Danville have been making rounds with local government, law enforcement officials and other agencies since June to discuss the intent behind its “list of demands.”

The group was created on the heels of two deaths of African Americans due to lethal force by officers: George Floyd of Minneapolis, and Louisville’s Breonna Taylor. It has garnered more than 2,000 members on its private Facebook group.

“Racial injustice has plagued our community too long and it is now time to commit to challenging our implicit bias,” the page says. Implicit bias refers to research that suggests people can act on the basis of prejudice and stereotypes without intending to do so.

The group’s aim with the list is to address inequality by demanding specific initiatives be developed and followed. It covers everything from education and healthcare to economic development and agriculture, and has been given to county and city governments, local boards of education and the Economic Development Partnership, as well to Ephraim McDowell Regional Hospital.

Click here to see a document of the group’s DEMANDS.

But the group’s most widely talked-about efforts have been those for more transparency in local policing, in order to bridge the gap between law enforcement and the Black community.

The topic has been a controversial one locally, where some relate the Black Lives Matter movement to protests-turned-violent in other, bigger cities — likening BLM to a terrorist organization. Some are upset because they say so many others don’t get the big picture — why equality for Blacks is such a multi-layered, multi-generational and systemic issue.

But so far, other than some disagreements between Change and local officials over sidewalk chalk being used on city property, there have only been peaceful demonstrations and protests, as well as productive meetings between the group and local agencies.

Most of the discourse has existed in the virtual world; comments and posts shared on social media, screenshot and forwarded to city and county officials. They range in seriousness, from accusations against deputies for profiling and using questionable tactics; to accusing the judge-executive, or the sheriff and his deputies, of belonging to the Klu Klux Klan, which the sheriff and judge say is “so ridiculous,” they choose not to respond.

Cheryl Burton, who has been on the forefront of the Change group and one of the most vocal in criticizing law enforcement and other officials, says she does want to have open, honest discussions. She and others presented their list to the Danville City Commission, receiving much feedback, including the idea to plan a workshop to study the group’s initiatives and how to achieve them.

Burton says the group sent its list to the Boyle County Fiscal Court, but has received no response after sending several emails about getting on the agenda.

“We have responded, that we got the list,” Judge-Executive Howard Hunt says, and that the court discussed the request for Burton to appear before it. “We’re in agreement that because she’s an announced candidate for office, it could be construed as political discourse, and we don’t allow the podium to be utilized as political discourse.”

Burton is running for a seat on the city commission as a write-in candidate, and says no one has responded with that reasoning about the group’s request to be on an agenda. She says she would not be the member going before the court, anyway.

But, Hunt says, “If she’s in charge of the group and the leader, all they’re doing is speaking political discourse.” He also says the court has the group’s “list of suggestions … so it seems a bit redundant to go over the same thing in person.”

When asked if social media posts have swayed the court’s reaction in not allowing the group to appear, Hunt responds, “You know I’m not on Facebook.” But he adds, “I do have screen captures about what they’ve posted, from people asking me if I realize what they’re saying. They’ve made some disparaging comments about me personally, that Facebook circle has, that are so — it doesn’t even warrant a comment, it’s that bad.”

Burton says she’s not heard that the court has any issues with anything on the list, other than being told Judge Hunt personally has a problem with the group using the word “demands.”

“‘Recommendations,’ that’s a better fit,” Hunt says. “But no, there’s nothing on the list I’m adamantly against. We’re examining every element of the written document as we go forward.”

When asked about accusatory comments and posts on social media, Burton doesn’t back down.

“My response is — no, Hunt, you have a problem with Black people, especially outspoken Black women who can see right through your BS,” Burton says.

“You can share any of this I’ve told you. I’m sick of this good ole boy, white-priviledged group of people in Danville. Come out and show us who you really are. Quit giving us hints of your racist ways and just come out and be the racist you are.”

Hunt pointed to the recent discussion held by the fiscal court on the goal to get body cams for sheriff’s deputies, one of the top law enforcement demands on the Change group’s list. But, the court hasn’t discussed exactly how it will pay for the cameras.

“We have a lot more homework to do —  bid specifications, where the money might come from …” Hunt says.

Sheriff Derek Robbins says he’s “100% for body cams, especially now, with all of the false accusations out there.” The SO is attempting to raise funds to buy them, like researching grants. A group of citizens also set up a fund that can be donated to at Farmers National Bank for the cause.

“This is a big capital expenditure — in the $300,000 range … We don’t generate enough revenue through our commissions to make a purchase like that,” Robbins says.

Payment plans and other options are being considered, he says, “but the storage cost alone is $27,000 a year, just for our agency,” referring to shelving videos on the cloud.

“I hope we see it happen while I’m in office,” he says.

During the presentation on body cams during the last court meeting, Magistrate Jason Cullen expressed urgency that the court make a move soon.

“At the end of the day, what we need to do is make sure the sheriff’s office is protected with the best equipment we can get them, and that the public is protected …” Cullen said. “I firmly think we need to move forward with this and figure out how to pay for it. We spend a lot of money on a lot of other things that aren’t quite as needed as this, so …”

Also on the list of demands from the Change group is the establishment of a citizen’s review board to give oversight into complaints against law enforcement agencies.

Although Sheriff Robbins says he’s fine with most of the requests, “this is one thing I won’t have happen while I’m here — a citizen’s review board of all complaints and use of forces.” He says having untrained citizens decide over complaints against law enforcement isn’t realistic.

“I’m fine with another law enforcement agency if they want to critique the way we handled something, but the layperson who’s never been in that situation, I don’t know how they can say whether it’s been handled appropriately or not.”
Robbins says it’s hard for citizens to put themselves in the place of officers, who have to make snap decisions often. “And when you’re in that life or death situation, I can speak personally that race has never even crossed my mind. There are 30-something officers at the Danville PD, and our 12-15 guys, they make those decisions weekly. In 20-something years, I don’t know anyone who’s pulled the trigger. That’s pretty damn good training.”

He says the SO did recently revamp its complaint process. “There’s now a three-page form,” which must be filled out by the complainant, who should be the person involved in the incident in question. “If they are an adult, they need to file it themselves,” Robbins says. He says the public would be “surprised at the amount of 40-year-olds’ moms calling in about their arrests. We’re not taking a complaint from his mother who wasn’t there. This happens so many times, because they may have been using a parent’s car. But the person involved in the complaint needs to actually fill it out.”

Burton points to a video recently released, through P Pi Productions which has been interviewing African Americans about their experiences growing up locally. Tryston Ford, a local teacher, shares personal situations like being referred to as “thug-like” by a student in the past, apparently because he’s a Black man with dreadlocks.

He talks about two interactions with the sheriff’s department on traffic stops, and that he wasn’t given a reason for being pulled over. Ford claims that in both situations, the deputy went straight to asking “if guns and drugs were in the car.”

In one of those instances, Ford describes how he was stopped one day on Main Street, which he says he deserved due to not wearing his seatbelt. What he says he didn’t deserve is that the deputy asked if he could search, and that Ford told him he didn’t think he had probable cause but allowed him to anyway, and that a canine was used.

“There I was, on Main Street, in the middle of the day, all my car doors open … then four or five Danville Police officers pull up” to assist the deputy, Ford says, with he and his passengers being “patted down” on the side of the street, and his friends being asked to remove their shoes. “They searched them down to their socks.”

Nothing was found in his vehicle either time, he says. He says in the video that it’s the first time he’s ever spoken publicly about the events.

To him, these situations are clear examples of racial profiling. “People think that it doesn’t happen in Danville, but it definitely happens. That kind of stuff affects me. Still, even with all the good stuff, I feel like I have to watch my back … like I get harassed. Anxiety — it’s a feeling. It creates paranoia and fear that they’ll pull me over.”

Sheriff Robbins says the video was the first he was made aware of either situation, and that the deputy is no longer with Boyle SO. “All I can say is that there’s no way I can look into a situation if someone doesn’t reach out to me and let me know that it’s happened,” he says. “We do make mistakes, and there are a lot of things that have to be considered in every situation. But I have an open door, and anyone can come see me at any time.”

Burton says that many take to social media instead of talking one-on-one with the department because they are “afraid of retaliation,” an assertion Robbins strongly disagrees with.

“I’d need to see proof on that, that someone has been retaliated against because they complained against me or a deputy.”

Coming up, the Danville Police Department responds to United for Change’s list of demands. Find the list in its entirety at amnews.com.

Pet grooming brought to your driveway