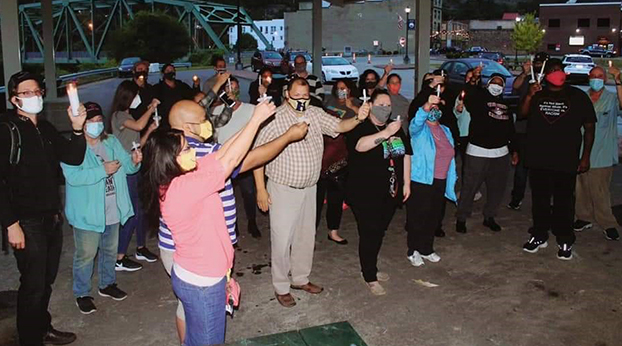 “Months after a wave of anti-police brutality and Black Lives Matter demonstrations stretched into rural, largely White areas, the organizing persists in pockets of Central Appalachia. Young and old are sharpening their political voices and strengthening alliances across races,” April Simpson reports for Stateline. “Their work, however, serves as an example of the challenges organizers face in pushing for racial justice in areas where people of color are few.”

There are relatively few Black residents in Central Appalachia (and younger Black people often leave for the cities when they grow up), so they’re often ignored by the mainstream media and white residents. And there are few non-white people in local political leadership. So it can be difficult to talk about racism in a mostly-white community, Simpson reports.
Ierusha Martin, a 65-year-old resident of Middlesboro, Kentucky, said racism is still alive and well in some areas. “We still do the good ‘ole boy system: not what I know but who I know,” Martin told Simpson. “So that is a terrible disadvantage for African-American people for the simple fact that we were not a part of the good ‘ole boy system, OK? A person of stature does not give us a recommendation, then we’re left out.”
Some older Black Appalachians are hesitant to engage in racial-justice work and protests because, after decades of seeing the personal and professional consequences of sticking their necks out, they prefer to keep to themselves and not make waves, one organizer told Simpson.
But progress is happening. In Pennington Gap, near Middlesboro, Jill Carson is the vice-mayor, the first Black woman to hold the office. She and her husband lead anti-racism workshops, have created an Appalachian African-American Cultural Center, and are reaching out to local white pastors to encourage them to address racism with their congregations, Simpson reports.
Younger Black Appalachians and white allies have been organizing marches, candlelight vigils in memory of Breonna Taylor, and trying to create open dialogue and cross-racial alliances, Simpson reports.
You Might Like

Kentucky is well on its way to a third straight week of a record number of cases of the coronavirus,... read more