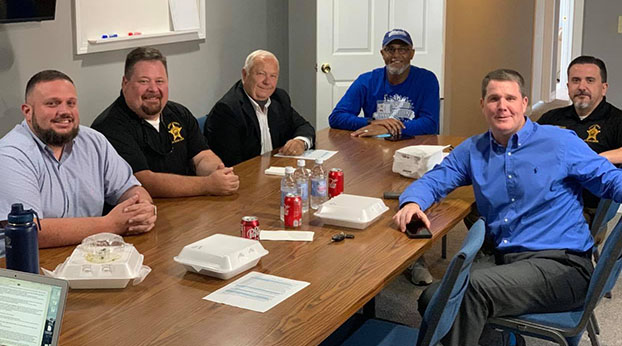 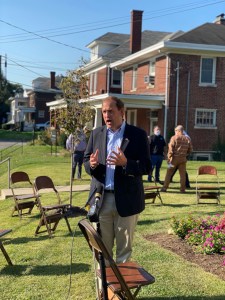 Congressman Andy Barr gives an interview after Wednesday’s press conference about a grant the Shepherd’s House received for its re-entry work with Boyle County Detention Center. (Photo courtesy of Congressman Any Barr’s office)

Shepherd’s House was the focus of a huge announcement this week: it was chosen to receive a grant worth $433,000 from the United States Department of Justice. And those who worked on the grant, and are passionate about helping others work through the disease of addiction, say it couldn’t have come at a better time, for multiple reasons.

“Shepherd’s House has never received anything like that,” Jerod Thomas says. These are federal dollars, he points out, and “it was very competitive — they gave out 20 of them, and we were the only one in Kentucky to receive it.”

Thomas is president and CEO of Shepherd’s House, which offers a residential treatment program in Lexington, intensive outpatient programs (IOPs) in Danville and Georgetown, and substance abuse programs (SAPs) inside of detention centers in Boyle and Grant counties.

But, all of the grant dollars are earmarked only for the re-entry program at the Boyle County Detention Center.

Basically, Thomas says, the money will be used to tie together all the Boyle County programming, aimed at county inmates. The SAP program through SH at the jail is for state inmates only, with its IOP operating out of its South Third Street location as a continuance of treatment after jail, often required as part of probation agreements which have been tremendously boosted with the help of County Attorney Chris Herron’s sentencing recommendations. And James Hunn, who was previously a volunteer with Shepherd’s House through Circle of Hope, now heads up the jail’s Moral Reconation Therapy (MRT) program offered to inmates, who receive “good time” credits for completion.

“Our staff becomes interchangeable,” Thomas says, which the grant will help pay for. “So Mr. Hunn now works for the Boyle County Detention Center and the Shepherd’s House,” along with Roger Fox, Shepherd’s House’s director of community outreach.

“And this doesn’t involve any taxpayer money,” Jailer Brian Wofford says. “No cost to them at all.”

Thomas says those who need treatment can “still get to us through the traditional way, through the courthouse and be sentenced and go through the IOP, but you can also start this program in the jail with Brian.”

Wofford says it’s all a part of the new county re-entry program, which the jail hasn’t opened yet due to getting through the COVID pandemic, “but we’re going to start it soon.” He must first figure out their exact numbers because the dedicated space they need is now being used for quarantine areas.

County Attorney Herron says, “Say we sentence you to 90 days, you’re going to start off your first 30 at the jail, and if you’re successful we’re going to let you out on bond to come here (Shepherd’s House) and finish up …” the 10-week program.

“So you’re going to get MRT,” Fox says, as well as the Portals New Direction program, which is paid for through the canteen fund. “But then you’ll also get GED (training and assistance), you’ll also get the jobs program through the Circle of Hope, you’ll be able to still receive all the services.”

More case managers will eventually be brought on, a double-duty that has been taken on by counselors, Thomas says, but the grant will now allow for licensed individuals to fill these roles.

They will be assigned to inmates and assist them in the multiple, crucial parts of re-entry, including getting their ID and social security cards, birth certificates and other documents and necessities to function as citizens.

Judge-Executive Howard Hunt says he thinks about how he previously went through a re-entry simulation at Northpoint Training Facility, the medium-security prison in Mercer County. “At the end of that exercise, I said I don’t want to leave. It was too frustrating to try and get reentry into society — the transportation, the money, the ID card … everybody’s got their hand out wanting something from you. You just —  you can’t get there.”

Wofford says, “Every box is going to be checked. There’s no reason somebody cannot come out that’s battling addiction and not be able to thrive.”

Hunt calls the grant “a forced-multiplayer,” enhancing and bringing together “all these pieces and parts to accomplish things that we were kind of out there on a limb by ourselves in different pockets, but now we’re all together in one team.”

The judge says that’s why he feels Shepherd’s House and the Boyle jail “may very well become a model for county SAP for the entire nation … “ Hunt says there’s only two or three in the commonwealth right now, but “what we’re doing is programmatically more extensive than what the other county programs are doing.”

Wofford says the jail will be “one of the few in the state that offers a treatment program for women, inside the jail,” another aspect the grant will help. He says he thinks the lack of programs for women is primarily due to the lack of funding, and that the county is lucky to have a fiscal court that “really supports treatment.”

Fox says it’s all partly due to Herron, Wofford and Hunt keeping to their campaign promises they made when they ran. “That’s been their belief the entire time, from the time they came into office, Chris, the judge and Brian all believe in investing in people. This is just confirming that fact and expanding on it.”

Re-entry Coordinator Hunn says that “the community, here in Danville … I’ve been amazed, not only in our elected officials, but our community believes in this, that people deserve a second chance.”

Hunn says he constantly hears from inmates about how the communities they come from don’t have this type of support system. Many who go through the program at the Boyle jail he says have even considered staying local to try and get into Seeing Hearts — a transitional home located on Lebanon Road.

The jail’s Chief Deputy Chad Holderman says, “Boyle County right now is to the point where Brian receives calls from parents …” asking if they can get someone transferred to the local facility so they can attend the SAP and MRT classes. The jail is working on being able to fill these requests, but due to COVID they haven’t been able to move inmates.

The men also credit Kathy Miles, coordinator of Boyle County Agency for Substance Abuse Policy, who wrote an extremely eloquent letter about why the program is so deserving of the funding.

Fox says because the money is tied to “a purely re-entry grant,” it also gives Shepherd’s House the opportunity to help direct those who may not be battling a substance use disorder but are in need of mental health services. Treatment can be correlated with help from New Vista, a non-profit mental health and substance use service agency, which works on case management at the jail and provides therapy for Shepherd’s House clients.

“It’s about helping everyone come out of jail, transition and be successful,” Fox says.

Thomas says it’s always an eye-opener working with the jail. When he first began, he thought “man, this isn’t a jail, it’s a mental health hospital and substance abuse treatment center …”

The grant monies will be administered for three years, and will go toward salaries, paying for program workbooks and trainings, for instance, as well as some technological needs to get everyone on the same system.

“And trips to Washington, we’re measuring outcomes for three years and presenting it in Washington each year,” Thomas says, part of the grant requirements. “So basically we’re a case study, and if this thing works, that’s where it becomes a model.”

Thomas says Congressman Andy Barr asked him to apply for the grant. Barr, a Republican representative for the Sixth Congressional District, led a press conference at the Lexington SH location Wednesday to make the announcement.

The grant funding is part of the U.S. Department of Justice’s Second Chance Act Community-based Reentry Program. The Second Chance Act of 2007 aims to support state and local governments and nonprofit organizations in their work to reduce recidivism and improve outcomes for those making the transition back into the community from prison, jail or juvenile residential facilities.

Judge Hunt says, “all the experience here, with Boyle County ASAP, Circle of Hope, Shepherd’s House, have all added to the creation of an atmosphere that is very receptive of growing and improving new lives that need to be changed.”

Hunn says that this type of community-wide involvement is imperative to breaking the stigma against convicted felons or those battling the disease of addiction.

As the growing season comes to an end, so does the Boyle County Farmers Market. And despite the unusual spring... read more