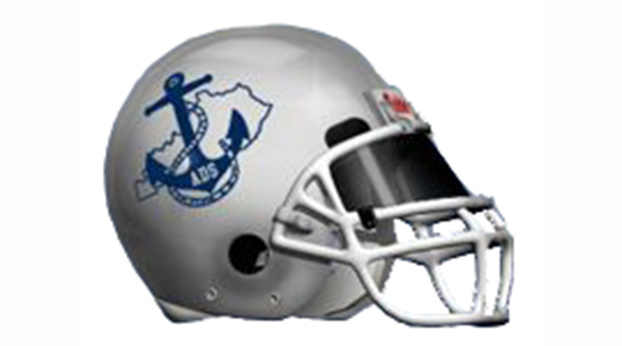 Danville had just six yards rushing in the first half against Raceland Friday, and coach Clay Clevenger knew his team must run the ball better in the second half to have a chance to defeat the Rams.

Then, Caleb Burns decided to take matters in his own hands.

Burns, who had 17 yards on nine carries in the first half, finished with 124 yards and three scores as the Admirals held off a late Raceland rally and held on to a 28-25 win on Bate High School night at Admiral Stadium.

“Obviously, we played without Corydon (Crawford), who missed the game with an illness tonight, and that changes us up a little bit,” Clevenger said. “We went more of a two-back set in the second half  and that paid us dividends. That might be something that we are able to build on.”

The Admirals took over after forcing Raceland three plays and out and promptly went 47 yards in six plays to score on a Burns’ four-yard run. Zachary Morgan tacked on the first of four straight extra-point attempts to give Danville a quick 7-0 lead.

“We came out and got a stop on defense and our offense took it right down the field to score and our guys thought it would be easy,” the Danville coach said. “Give Raceland credit, though. We knew coming in that they played hard, were solid and sound. They kept competing over and over.”

The Rams (4-4) countered Danville’s score with a 66 yard, eight-play drive, and scored on a one-yard pass from senior quarterback Jacob Hieghton to Parker Fannin, but the PAT was missed leaving the score 7-6 as the first period ended.

Heighton completed four passes for 40 yards and Raceland took its first lead of the night on a Heighton eight-yard run early in the second quarter to give the Rams a 12-7 lead.

The second quarter saw the return of junior running back Keelan Story, who returned for the first time since being injured in the season opener at Hazard.

He had catches of seven and 12 yards during a 61 yard, 10 play drive that ended when senior Blake Jones, who had five catches for 71 yards, was on the receiving end of a 20-yard pass from Sage Dawson to give the Ads (4-2) a 14-12 advantage.

Clevenger was glad to have Story back, especially with Crawford out with the illness.

“We tried to limit his plays as much as we could,” Clevenger added. “It was kind of a gametime decision after talking with him, his mom and his doctor right before the game. He had been practicing and he wanted to give it a go. We would give him the ball and get him out a little bit. He’s not in game shape yet.”

Danville tried one last play before the half but Dawson was leveled and fumbled and Ethan Melvin scooped up the ball and went 34 yards to score to give Raceland an 18-14 halftime lead.

Burns’ 51-yard touchdown run was the only score of the third quarter, and his third touchdown of the night from 15 yards gave Danville what looked like a comfortable 28-18 lead with five minutes,16 seconds to play in the game.

An interception by Brady Johnson in the end zone, Danville’s third of the night, thwarted one drive but Heighton connected with Conner Hughes for a 59-yard scoring strike four plays later to trim the lead to 28-25.

“I’m anxious to go back and look at the film,” Clevenger said. “They were hitting us right in the middle of the field. I don’t know if our outside linebackers weren’t getting to their drops but we have to fix that. We’re a little soft at times in our coverage and we have to tighten that down a little bit. This game will help us, though. They were very active upfront similar to Somerset.

“We will see if they will come here to play but we’ll have to see how that plays out,” Clevenger said. “It’s getting dicey right now, If you get a kid with Covid and have to quarantine, you’re done. We will have to think long and hard about how we are going to handle this next week. We’ll have to see what we need to do that is best for our team. It’s just crazy right now.”

Bate Night and Purple Jerseys: For the fourth year in a row, Danville wore the Purple and Gold jersey’s honoring Bate High School. With the win, the Ads have won all four games that they have worn the jersey.

There are zero new and expanding location announcements for economic development in Boyle County so far in 2020, for January... read more