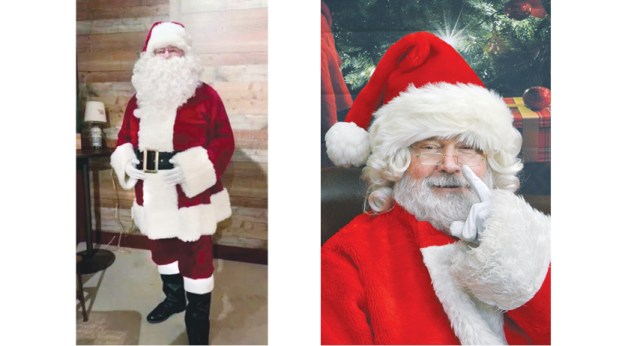 Kevin Caudill, a Danville city commissioner, and Jamey Gay, head athletic trainer at Centre College and a Boyle County magistrate, are stand-in Santas, donning red suits and white beards come winter. Santa is a busy man and has to be many places at once, so sometimes he has special helpers fill in for him. 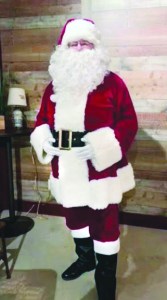 Kevin Caudill is one of Santa’s helpers.

Caudill started filling in for Santa about 15 years ago when he was in the Kiwanis Club. They sponsored some parties for young people and senior citizens. He spent a year or two borrowing the “official uniform,” then bought his own online “from the North Pole.” Since then, it’s been one of his favorite parts of the season.

“The spirit and excitement of the kids is contagious,” Caudill said in an email. “It definitely gets me in the Christmas spirit. When you walk into a room as Santa it is as if you are a rock star for little people. Everyone should experience that at least once.”

Some of the most-requested items have been Game Boys and Nintendo DS a few years ago, and video games and Barbie toys are popular every year.

“Sometimes kids ask for things and I’ll have to go look them up later to see what they were talking about,” he said.

Caudill said his “‘beard’ magically appears every December along with a head of bushy hair” he said he wishes he could keep.

His own children never sat on his lap and asked for gifts, but his wife still does. Also, he makes videos for his nieces, nephews and other family members.

Some of Caudill’s favorite memories are when children will ask for gifts for their family instead of themselves.

“I also remember one young lady who proclaimed I wasn’t a real Santa because I had on brown boots,” he said in his email. “I had a pair of black ones by my next appearance.” 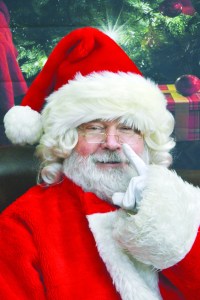 Gay took on the role of a Santa stand-in after he found Santa’s red suit after his wife’s grandmother, who owned and operated a florist and gift shop in downtown Hazard, died in 1987. They found the suit in the attic of the shop when they were cleaning it out.

“Nobody else in the family wanted the suit so I gladly took it and felt sure I would enjoy putting it to use and I have loved playing Santa,” Gay said in an email.

And of course, no Santa stand-in is complete without a white beard. Gay has begun growing his own beard over the last couple of years, now that it’s white enough to look like Santa’s. He’s found he needs to start growing it out during October “to get Santa ready to make his trip from the North Pole.”

“There is nothing like looking into the eyes of a child as they look back into the eyes of Santa,” he said in his email. “That is what (is) always worth being one of Santa’s helpers. Santa does have a harder time keeping up with what all the hot toys are that the elves stay busy making each year. I have been doing it long enough that many popular toys have come and gone to the point that I cannot recall them all.”

The first time Gay wore the suit locally was around 1989 when he made a surprise appearance with a local running group that ran on Tuesdays dressed as Santa. Runners sang carols, and people honked horns at them, excited to see the Santa parade.

“That was the beginning of the Run with Santa that developed into an annual event from Danville Bike and Footwear,” Gay said in his email. “It included a run with Santa followed by pictures with Santa when it was over.”

Santa has also made appearances on Main Street Danville during Heart of Danville events and at other community events, locally and in surrounding towns like Harrodsburg.

His own children have sat on his lap and told him what they want Santa to bring them for Christmas, and he tries to watch what his voice sounds like when he interacts with the children who come to see him. After all, he has to pass as Santa.

“I have found that with all the children’s activities I have been involved with through the years that the kids will often recognize my voice so I have to be careful with that,” Gay said in his email. “I am also a particular Santa when it comes to photos since I know they will keep the photos for a lifetime and so I always joke with Santa’s helpers that take the photos that it has to be Santa approved – that has gotten easier in the digital age.”

As of Sunday, Dec. 20, Northpoint Training Center had 409 active COVID-19 positive inmates, according to the Kentucky Department of... read more