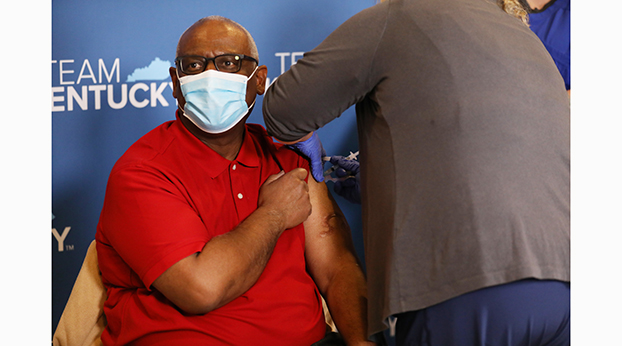 Eleven top legislative leaders from throughout the commonwealth received the COVID-19 vaccination Monday in the Capitol Rotunda, highlighting the bipartisan support for the safe vaccines that are Kentucky’s best path to defeat COVID-19.

The House and Senate leaders who received the Moderna vaccine Monday are:

“I can think of no better start to this legislative session than lawmakers from both sides of the aisle coming together to demonstrate to our fellow Kentuckians that these vaccines are safe and effective,” said Gov. Andy Beshear. “This show of bipartisan support for the COVID vaccine is a great start to the year and a prime example of what we can do when we set aside politics and put our people first.”

“Public health officials on both the state and national level have advised that getting this vaccination is critical to building public confidence in its safety,” said House Majority Floor Leader Rudy. “I am here today to do just that. As availability increases statewide and we enter new phases of the distribution plan, I urge Kentuckians to consider getting vaccinated. President Trump’s efforts through Operation Warp Speed have led to a decisive moment in this pandemic, and now we have a chance to successfully stop the spread of this virus.”

“I’m proud to join with many of my fellow elected leaders in the campaign promoting the use of this vaccine and encourage every Kentuckian to get vaccinated if at all possible,” said House Minority Floor Leader Jenkins. “This life-saving medicine is a modern medical miracle, given how quickly it was developed and how safe and effective it is. The more who take it, the sooner we can get back to the way of life we all want.”

“COVID-19 has been devastating in so many ways, and I cannot wait for the day when this pandemic is behind us,” said House Minority Caucus Chair Graham. “This vaccine is the path that gets us there, which is why I am more than happy to take part and to ask other Kentuckians to join with us. I think of this vaccine as the moon shot of our times, because it proves once again just how much we can accomplish when we work toward a common goal.”

“I’m grateful to have the chance to promote this vaccine and believe it is important for elected officials to set a positive example,” said House Minority Whip Hatton. “That also means we cannot let our guard down until vaccine use is widespread and infection rates are close to zero.  We must remain vigilant in wearing our masks, maintaining social distancing and washing our hands, but the good news is that, thanks to this vaccine, better days are on the horizon.”

Top federal and state health leaders, including U.S. Centers for Disease Control and Prevention Director Dr. Robert Redfield, have encouraged governors and other public officials to publicly receive the vaccination to emphasize the safety of the vaccine and to build confidence and public support.

Dr. Steven Stack, commissioner of the Kentucky Department for Public Health, urged state leaders to receive the vaccination for the continuity of state government and to demonstrate to Kentuckians that the vaccine is safe and effective.

Gov. Beshear encouraged other community leaders including those in elected office, business executives and faith leaders, to take the vaccine when it is their turn. Meanwhile, until more people are vaccinated, the Governor said Kentuckians must continue to take precautions to slow the spread and save more Kentuckians from COVID, which has already killed more than 2,700 people in the commonwealth alone. People must continue to wear masks, social distance and avoid gatherings.

The Monday vaccinations follow the first inoculations in Kentucky on Dec. 14, when the first round of hospitals began receiving and administering 38,000 doses of the Pfizer-BioNTech vaccine to front-line health care workers. On Dec. 21, long-term care facility residents and staff began receiving the Pfizer-BioNTech vaccine through Walgreens and CVS, which have an agreement with the federal government.

As of today, the Pfizer and Moderna vaccines have been administered to more than 60,000 Kentuckians, predominantly health care workers. With both vaccines, a second dose is required three to four weeks later. To date, Kentucky has received more than 120,000 doses of vaccine. This week, Kentucky is expected to receive 53,700 additional doses with 27,300 from Pfizer and 26,400 from Moderna.

A traffic stop just before midnight on New Year’s Eve ended with a chase for the Boyle County Sheriff’s Office.... read more