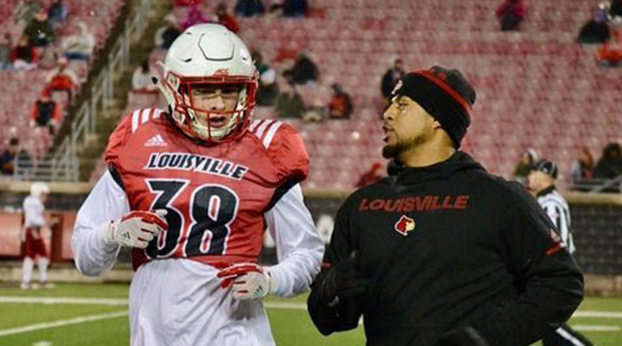 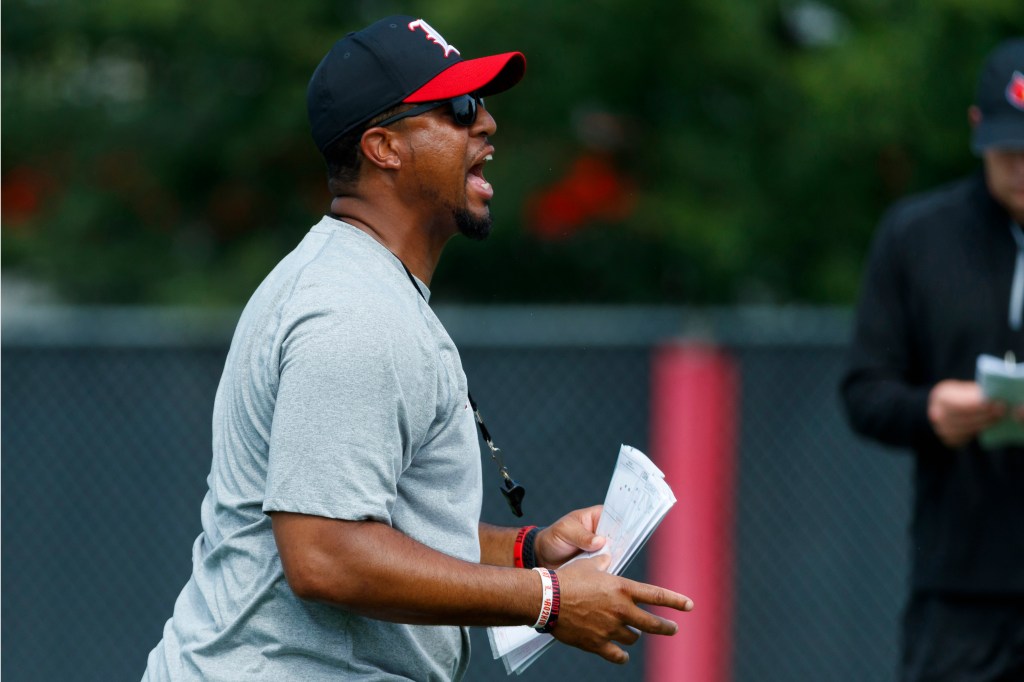 ShaDon Brown, a former standout football player at Danville High School, has worked his way up the coaching ladder. He has accepted a position on the staff of University of West Virginia under head coach Neal Brown, a former Boyle County standout. – Photo by Adam Creech/University of Louisville Athletics

ShaDon Brown was back in his home state and said he “loved” coaching at the University of Louisville. Yet there was no way he could pass up an “unbelievable” opportunity to become co-defensive coordinator at West Virginia.

“The more I talked with (West Virginia coach) Neal (Brown) about his vision and the things he was doing and implementing with players and staff to help them develop and grow, the more I knew it was a no-brainer to take the job,” Brown said.

“We have not really ironed out my position duties yet but it is just a great opportunity for me to grow and take on a role I have not had at this level. I am really looking forward to it. They were good last year but I want to try to help make them better.”

This is just another move up for the 1999 Danville High School graduate that continues the trajectory his coaching career has been on since his playing days at Western Kentucky University and Campbellsville University ended. He started as an assistant coach at the University of the Cumberlands, and was an assistant coach at both Danville and Boyle County High Schools before becoming head coach at Rowan County from 2008-10. He spent five seasons coaching the secondary at Wofford College. He was part of Army’s turnaround from 2-10 in 2015 to an 8-5 record in 2016 before spending the next two seasons coaching the secondary at Colorado. He was the safeties coach at Louisville the last two seasons.

ShaDon Brown has known Neal Brown since they competed against each other in football, basketball, and baseball when the West Virginia coach was at Boyle and ShaDon Brown was at Danville.

“Neal’s father, Tom, was a big part of me going to Boyle in 2007 and played a big role in me getting the job at Rowan County,” the new West Virginia coordinator said. “I have a lot of respect for the Brown family. Neal and I would talk from time to time and he reached out to me about this opportunity. I am sure he had done his homework and research on me because he’s very thorough. I visited the university and was really impressed with the culture in that (football) building. I talked to everybody who coached in the program. Everybody I talked to was singing the same message.”

ShaDon Brown said he always had goals and dreams but never dreamed of something like this happening where he would join his former high school rival’s coaching staff — and another former Danville player from the same era, Nathan Fuqua, is the defensive coordinator at Georgia State.

“I am sure both of us when we were 17 or 18 and fighting against each other in heated rivalry games never thought we would stand on the same sideline or ride in a car together and help run the same football program,” ShaDon Brown said. “It’s a great story and testament to the community where we come from. It also shows how the game of football connects people no matter the color of your skin or economic background. We were two guys from the same community but from different sides of the track.”

“So obviously a lot of my coaching success comes from my connections to Danville,” ShaDon Brown said.

The new West Virginia assistant coach still remembers his junior year of high school telling Danville defensive coordinator Jerry Perry he knew he wanted to be a coach. He would go in on Saturday mornings to watch film with the Danville coaches before other players arrived.

“They were teaching me things to make me a coach on the field,” ShaDon Brown said. “That ignited my love of coaching. My ultimate goal was to be a high school football coach and PE teacher. That’s where my ceiling was. It’s amazing how God has put people in my life to help opportunity find me. I have never got a job I had to ask for. I have tried to work hard and do a good job and have been lucky then that people have found me.”

He admits leaving Kentucky is “bittersweet” for him and his family because he has been so close to Danville the last two years. However, he said Neal Brown has other “Kentucky guys” on his staff and that helps.

“When I walked in the door at West Virginia I bet out of his nine coaches I have known seven a long time,” ShaDon Brown said. “Now I have some time to build relationships, meet players, get on the phone with their families and let them know who I am. I have to dive into the playbook, watch film and learn. But I can’t tell you how excited I am and how special this opportunity is for me.”

Nearly 20% of total U.S. refinery capacity offline  Motorists should brace themselves for even higher gas prices in the days... read more