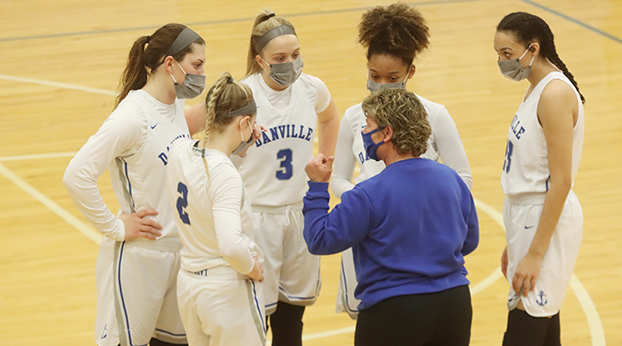 Danville girls will face Bethlehem in All “A” Classic Feb. 25; Download bracket here

The Danville girls will get to play in the All “A” Classic after all.

The tournament that the Lady Admirals have been pointing toward since the preseason has been rescheduled after officials announced its cancellation earlier this week.

The decision made Thursday by the All ‘A’ board to play the tournament under a revised format was welcome news to a team led by six seniors who were disappointed two days earlier when their coach told them the event had been called off.

“I am absolutely tickled that this group of seniors will get the opportunity to play in the All ‘A’ state tournament,” Danville coach Judie Mason said Thursday night. “I’m not sure any of us thought this was possible 24 hours ago.”

The Lady Admirals are one of the top teams in the 16-team field, and Mason said she is convinced they can make a run at the championship of the statewide small-school tournament.

However, they will have to prove themselves right out of the box with a first-round game at defending champion Bethlehem, the team that eliminated them last year.

The All “A” brackets were reconstructed to allow teams to play closer to home in the first two rounds of the girls and boys tournaments, which will be played at local sites.

In the original bracket, Danville was to play Metcalfe County in the first round. Instead, the opponent will be Bethlehem, which defeated the Lady Admirals 53-36 in last season’s semifinals.

Teams have been grouped into four-team pods that appear to be geographically based but do not necessarily include schools from consecutively numbered regions. Danville (9-3), the 12th Region champion, was grouped with teams from the 5th, 6th and 7th regions. Host sites were determined by coin tosses.

Semifinalists will advance to McBrayer Arena in Richmond for the final two rounds March 5-6.

All “A” officials announced Tuesday the tournament had been canceled due to severe winter weather, then signaled the next day that there might be a way to play after all. The tournament board surveyed qualifying schools to gauge their interest, then met virtually Thursday to consider its options.

Mason said the cancellation was a bitter pill for a senior-dominated team that had made the All “A” the focal point of its season and had followed strict COVID-19 protocols — including wearing masks while playing — to have the best chance to play.

Now, the Lady Admirals will instead try to apply the lessons of the past two seasons to this year’s tournament.

Two years ago, Danville lost by two points to Murray in the first round. Last year, the Lady Admirals defeated Louisville Collegiate and Glasgow before bowing to eventual champion Bethlehem in the semifinals.

“This year is (largely) the same team,” Mason said.

Danville was rated third among teams in the All “A” field in RPI ratings posted by the KHSAA earlier this week, behind only Bethlehem and Bishop Brossart.

The Lady Admirals reached the All “A” finals in 2014 — their best result in 12 appearances — and Mason has used that to motivate this year’s team.

She said the players have been able to roll with the many changes precipitated first by the COVID-19 pandemic and now by winter weather, but she said the seniors also are practicing and playing with a sense of urgency.

“For six of them, that’s it for high school ball,” Mason said. “There’s a sense of urgency for them, and I remind them of that, but to be honest, they remind me. They see the end coming, but I don’t think they see it as pressure, they see it as opportunity.”

The first priority for Danville will be getting back on the court. The team has not played since Feb. 9, and its next scheduled game is Saturday.

“We’re out of shape now, everybody is,” she said. “We just need to play games and get back into shape.”

Danville girls’ trip to All “A” Classic canceled due to storms; Officials still hoping to play with altered schedule

By MIKE MARSEE Contributing Writer If the Danville girls get to play in the All “A” Classic after all, they’ll... read more