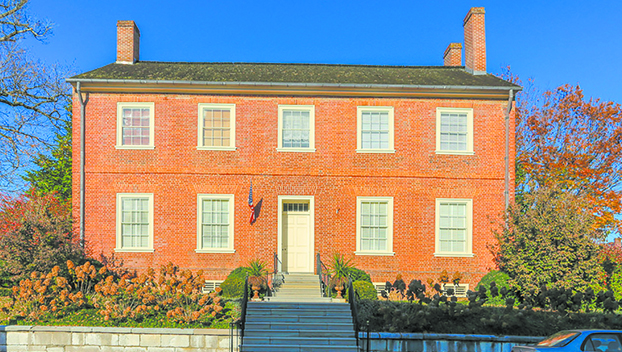 Tradition indicates former Governor Robert Perkins Letcher of Lancaster helped plan and construct Kentucky’s first governor’s mansion alongside his friend and future governor Thomas Metcalfe. The brick structure, built in 1797, is Georgian style and sits on less than an acre of land at 420 High Street in Frankfort.

Former Governor Robert P. Letcher is credited with helping build Kentucky’s first governor’s mansion in Frankfort. He was educated in Joshua Fry’s private academy near Danville, and was a politician in early Kentucky. 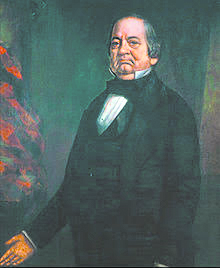 Letcher served as the 15th governor of Kentucky, 4th and 5th District House of Representatives, and was a diplomat to Mexico.

Nicknamed “Black Bob”, Letcher was known as a witty and gregarious campaigner. He also was “known to distract audiences at his opponents’ campaign speeches by playing a fiddle.”

Letcher’s political career began in 1813 when he was elected to represent Garrard County in the state House of Representatives. He served two terms.

Ten years later, he was elected as a Democratic Republican of the 18th Congress in 1823. He served in the 4th district for 10 years when Garrard County became part of the 5th district.

In 1836, Letcher served as presidential elector on the Whig ticket. He returned to the Kentucky House later that year and was re-elected every year until 1838. He also served as speaker of the house.

On his final day in office, Letcher proclaimed the first Thanksgiving Day on Sept. 26, 1844. After leaving office, he returned to his law practice in Frankfort.

Letcher was appointed as the U.S. Envoy and Minister to Mexico in 1848 by President Zachary Taylor. He went to Mexico City in 1850 and returned home two years later. He remained active in Kentucky politics and was named to the 8th Kentucky Congressional seat.

Letcher lost his last race for public office to John C. Breckinridge in Congressional race in 1852 and resumed his law profession.

Born in Goochland County, Virginia, on Feb. 10, 1788, he was one of 12 children of Stephen Giles and Betsy Perkins Letcher. The family moved to Harrodsburg about 1800, and later settled in Garrard County.

He attended common schools, but was dismissed for being “unruly.’’ He also studied masonry in his father’s brickyard. He later attended Fry’s Academy and gained a sound education.

He returned to his father’s brickyard where traditions say he helped build the state’s first governor’s mansion alongside his friend and future governor Thomas Metcalfe.

After Letcher studied law under Humphrey Marshall, he was admitted to the bar and began practice in Lancaster.

Letcher also served as judge advocate in the volunteer militia during the War of 1812.

Letcher was married twice, first to Susan Oden Epps and later to Charlotte Robertson. No children were born in either marriage, but he and Charlotte raised one of their nieces.

(Research for this article was taken from Wikipedia.org.)