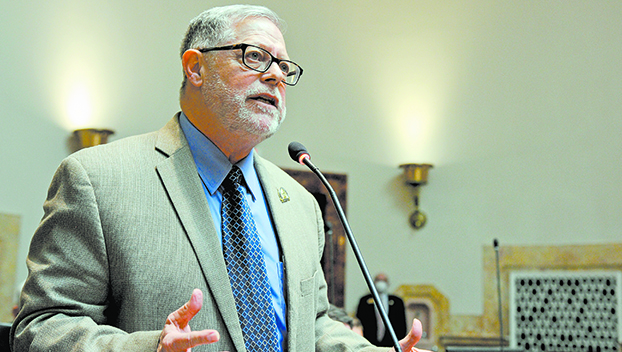 The final two days of this year’s 30-day legislative session required the burning of the midnight oil. Before adjourning sine die, the legislative process required a lot of “hurry up and wait.” However, I did enjoy the brief windows of opportunity to enjoy the pleasant weather on my trips from my legislative office to the Senate Chamber in the Capitol. After a rough stretch of weather, I hope you were able to enjoy some of the sunshine and warmth as well. As I departed from the Capitol in the early morning hours of Wednesday, March 31, I left with a sense of pride because I am pleased with what the General Assembly was able to accomplish.

To adjourn “sine die” means without assigning a day for a further meeting or hearing or to close official business for an indefinite period. For legislators, the phrase means the current legislative session has ended.

Much of the work on the final two days of the session included overriding vetoes that the Governor issued. By the conclusion of the 2021 Session at 11:47 p.m. on Tuesday, March 30, the legislature successfully overrode over two dozen of the Governor’s vetoes. I want to highlight a number of those in this week’s legislative update and share with you some information on the appropriation of funding for some exciting initiatives that will make Kentucky stronger. But first, I want to mention a bill that passed and is not subject to a Governor’s veto.

House Bill (HB) 91 is a constitutional amendment that will now be proposed to Kentucky voters on the 2022 November election ballot. If supported by a majority of Kentucky voters, the amendment would add a new section to the Constitution of Kentucky stating that our constitution does not secure or protect the right to abortion or funding of abortion. HB 91 makes sure a rogue court does not disenfranchise Kentucky and that it is the General Assembly that makes the law concerning the lives of our most vulnerable citizens, unborn babies. I encourage your support of this constitutional amendment when you cast your vote next year.

Bills that were vetoed by the governor but were overridden by the General Assembly include:

• Senate Bill (SB) 11 provides recourse for property owners to pursue legal action for intentional damages done to rental property by classifying it as criminal mischief. The General Assembly overrode the veto because landlords need the ability to remedy a situation where a tenant has intentionally and purposefully damaged rental property. Currently, issues such as these can only be taken up as a civil matter. The bill also sets up a way for landlords to review tenant applicants’ rental history. I was happy to co-sponsor this piece of legislation.

• SB 93 is another bill I co-sponsored. It gives the Kentucky Agriculture Commissioner authority to appoint members of the State Board of Agriculture. In the Governor’s veto message, he argued that the bill “undermines the importance of agriculture” and violates the Constitution of Kentucky by removing his ability to make the appointments. The Governor is correct about agriculture being vitally important to Kentucky. For that reason, this vital industry deserves the expertise of the Kentucky Department of Agriculture to oversee it. The veto message from the governor is wrong on the constitutionality of the bill in two significant ways. 1. The state constitution explicitly tasks the Agriculture Commissioner to promote the interests of agriculture and horticulture, agricultural revenues, and the protection of Kentucky’s livestock industries. 2. Statutory law is within the constitutional purview of the legislative branch.

• SB 65 nullifies specific administrative regulations the legislature has found deficient. Most notably, it ends a regulation issued by the administration that has allowed Supplemental Nutrition Assistance Program (SNAP) benefits (formerly known as food stamps) to be given to non-custodial parents who are delinquent in their child support. The legislature finds it inappropriate to be rewarding parents with benefits when they are not providing for their own children, not only as a moral obligation but a court-ordered one for that matter.

• SB 251 reorganizes the Office of the Kentucky Attorney General (AG) and allows the AG to bring an action challenging the constitutionality of Kentucky’s laws, orders, or regulations in any county where the alleged constitutional harm has occurred. Currently, all challenges to state law are required to go through the Franklin Circuit Court simply because the seat of state government is physically located in Franklin County. This essentially makes a super circuit where only two judges preside over matters that impact the entire state. There are plenty of qualified judges and circuits across the state that are perfectly capable of hearing these cases. SB 251 will help remedy those concerns and prioritize the citizens’ rights over the convenience of the state.

• HB 563 requires school districts across the Commonwealth to implement policies to allow non-residential students to attend schools within the district. For counties with populations greater than 90,000, Educational Opportunity Accounts (EOA) funded by private donations that qualify as a tax credit would be established, but sunsets after five years. Families who are at 175% of the reduced-price lunch threshold would qualify for these funds, which could cover numerous educational expenses such as textbooks, tutoring or after school programs, online learning programs, tuition, transportation and much more.

Currently, families with the means to do so can afford to make their child’s education choices. HB 563 is a historic opportunity to shift the state’s education system’s focus to better meet Kentucky’s children’s needs. It promotes flexibility and choices and addresses disparities in education options currently available to students. The bill does not remove any money from public education. In fact, it provides $25 million more towards education. This is on top of over 41% of the state budget (out of an approximate $12 billion budget) that already goes to K-12 education. Additionally, the Kentucky Department of Education received $2 billion recently through the American Rescue Plan Act of 2021 (ARPA).

On that note, I have significant appropriation updates to provide you. The General Assembly approved multiple beneficial budgetary items in the final two days of the session. Some of this is the result of funding provided through ARPA. New expenditures in the state budget, perhaps most notably, included $140 million to fund all-day kindergarten. This funding came as a result of discussions on HB 563. School districts are currently finding ways to fund all-day kindergarten, but this additional funding to offset their costs will be helpful.

Additional appropriations included but are not limited to:

• $300million for broadband expansion. $50 million in which can be utilized immediately to get the ball rolling on economic development projects. The legislature also put in place safety and oversight mechanisms to review performance levels and make sure the funds are used to meet unserved and underserved areas’ needs.

• $150 million for counties based on population size for infrastructure projects.

• $50 million to provide drinking water to areas in need with an additional near $50 million for grants to counties with greater than allocation costs.

• $575 million in ARPA funding as loan repayment for the more than $800 million loan the Governor took from the federal government. Millions in funding was provided for hiring additional personnel as well.

We received good news from the federal government late last week that the President approved Kentucky’s federal disaster declaration following the severe ice storms that impacted parts of Kentucky earlier this year. It appears that all counties in the 15th District are eligible. According to the federal government’s announcement, money will be available to local governments and certain private nonprofit organizations on a cost-sharing basis for emergency work and repair or replacement of facilities that were damaged.

If you have any questions or comments about any of these public policy issues or regarding the 2021 legislative session, I certainly want to hear from you. You can contact me toll-free at 1-800-372-7181 or email me at Rick.Girdler@lrc.ky.gov.

Senator Rick Girdler (R-Somerset) represents the 15th District, including Boyle, Lincoln, and Pulaski Counties. Senator Girdler is the co-chairman of the Capital Projects and Bond Oversight Committee. He also serves as vice-chairman of the Senate Standing Committee on Banking and Insurance and is a member of the Economic Development, Tourism, and Labor Committee.