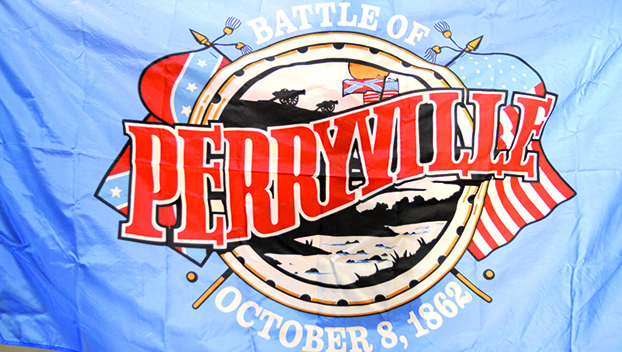 Pictured is Perryville’s city flag. At a May 6 city council meeting, council members discussed the possibility of placing 12 city flags, one on every other flag pole along Second Street, in between each American flag. Council tabled the decision in order to ask for public input, since the flag features the Confederate flag.

Councilor Kelly Gray had mentioned visitors driving through town may form misconceptions about the city’s values, and she doesn’t want people to get the impression the city supports the Confederacy. Design of the flag is based on the fact both Union and Confederate forces fought in the Battle of Perryville.

The city is currently asking for public input on the City of Perryville Kentucky Facebook page from citizens of Perryville only, about whether to hang the flags. On Facebook the city also posted on April 29 that city flags were for sale at City Hall at 214 E. Second Street for $40 each.

County may get new voting machines and official website

As the Boyle County Fiscal Court 2021-22 budget workshops come to a close, two expenditures are being discussed — new... read more