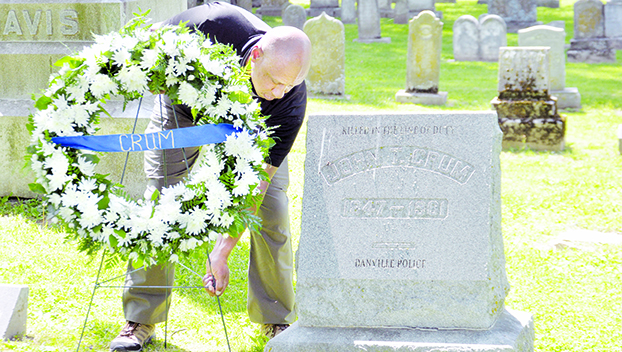 Danville Police Chief Tony Gray places a wreath on the grave of John Crum, who died in the line of duty in 1901. -Photo by Robin Hart

Danville Police Department’s two fallen officers were honored on Friday as part of National Police Week. DPD Chief Tony Gray and Assistant Chief Glenn Doan placed wreaths on the graves of Sgt. Ryan Sr., and Officer John T. Crum at Bellevue Cemetery even though a public ceremony wasn’t held this year because of the pandemic. Gray said it’s a tradition that the department has done for well over 26 years. 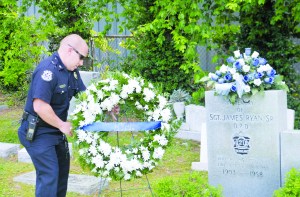 Gray said even though both officers were killed decades ago, “It’s always important to honor those people who made the ultimate sacrifice, even through these odd times during COVID.”

Gray added, “We’ve not changed what we’ve done in policing.”  He said policing has continued during the pandemic.

Doan said, “Policing is a very difficult job. It always has been. It’s good to honor those who came before us. … I’m proud of  the department and what we’ve built, and continue to build.”

According to the website, Officer Down Memorial Page, Sergeant James Ryan Sr., was 64, and was scheduled to retire two months after he was shot on Nov. 3, 1968, but died the next day. Ryan had served with the DPD for 26 years. Ryan and another officer were responding to a burglary call at a South Fourth Street location when they encountered the 36-year-old suspected who opened fire, “striking Sergeant Ryan six times.” The suspect was later arrested, tried and acquitted.

Officer John T. Crum, 53, was shot and killed while investigating illegal alcohol sales at a local business on April 10, 1901, according to the website. He he had been with the department fours and left behind a wife and 10 children.

“Crum had gone to the bar to serve a warrant on the owner for serving alcohol. When he entered the bar four patrons immediately left, leaving only Officer Crum and the owner. A struggle ensued between the two and the suspect shot Officer Crum twice in the chest, killing him.

“The man fled the scene but was quickly apprehended. He was convicted of Officer Crum’s murder and executed in a public hanging on Dec.20, 1901.”

Masks off and Beshear lifting all restrictions June 11