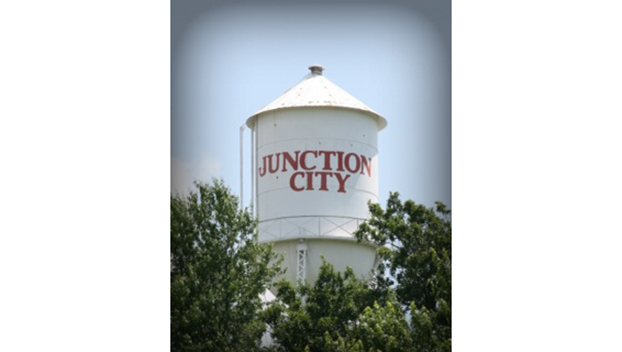 Junction City is establishing a code enforcement ordinance and a board which will have the power to impose fines on residents who violate the ordinance concerning garbage, tall grass, abandoned vehicles, discarded appliances and other junk on their property.

At a special called city council meeting Tuesday night, the council approved the first reading of its code enforcement ordinance then immediately swore in volunteers, Kathleen Pemberton, Ryan Owens, Lloyd Bowling, Debbie Kitchen, and Roy Miller to serve on the code enforcement board.

Mayor Jim Douglas said, “This is going to take time. We’re going to have stumbling blocks.”

After the meeting, Douglas said the ordinance was needed because, “there’s so much trash around town and people won’t clean it up.”

He said in the past, if the police chief cited someone for a code violation and they refused to clean up their property, they would be taken to court or a lien was placed on the property. “It takes months to get somebody before the court, if you’re lucky,” Douglas said.

By establishing a code enforcement board, “We felt like this was the road to take. It’s going to take a while to get it stopped. We’re going to have people who ain’t going to like it.”

After the second reading of the ordinance at the regular city council meeting on June 10, residents can complain about the condition of their neighbor’s property to city hall or Police Chief Russell Preston.

Preston can issue a citation and if the property owner contests it, the case will go before the code enforcement board who will determine what action to take in order to remedy the problem area.

Preston said one example of a non-compliant property owner is on Bellevue. He issued a citation months ago, and the case has been in Boyle circuit court for at least nine months. The resident has mowed the property and one junked vehicle was removed, but there are five more on the lot. “There’s still a lot of improvement to do there.”

Preston said “hopefully” the citations, followed by fines and liens — not just court dates — will make people clean up their properties. “The dollar signs will make a difference,” Preston said.

Douglas agreed and said have the city’s own code enforcement board will also “eliminate a whole lot of wasted time,” waiting on the court system to intervene.

According to the code enforcement board ordinance, the board “shall have the power to issue remedial orders and impose civil fines as a method of enforcing city ordinances when a violation of the ordinance has been classified as a civil offense.”

It can “conduct hearings to determine if there has been a violation of an ordinance; subpoena alleged violators, witnesses and evidence; take testimony under oath; make findings and issue orders to remedy any violation; and impose civil fines.

Civil fines that the code enforcement board can determine when a violator does not contest the citation include:

If a violator does contest the citation and the board decides to uphold it, the fines include:

In addition, the city can put a lien on property for “all civil fines assessed for the violation and for all charges and fees incurred by the city in connection with the enforcement of the ordinance, including abatement costs.”

Newly appointed board member Debbie Kitchen said she wanted to serve on the board, “Just like everybody else, to improve the community, make us a better place.”

Pemberton said in certain areas in town, the trash and junk problem “is not good,” but it’s not everywhere.

Jensyn Bradshaw may not understand why a fire truck and lots of other emergency vehicles flashed their lights and sounded... read more