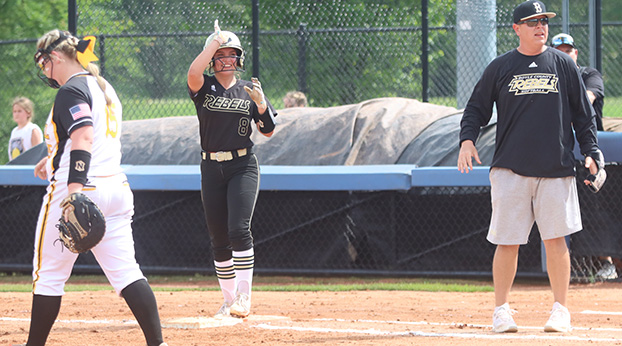 Summer Ray of Boyle County reacts after driving in a run with a single in the third inning Friday as first-base coach Jay DeBord follows the action and Johnson Central pitcher Chloe VanHoose regroups. The game was stopped minutes later and ultimately suspended with Boyle leading 1-0 in the third inning; it will resume Sunday. - Photo by Mike Marsee

Boyle state softball game suspended due to rain; to be completed Sunday at 1:30 p.m.

LEXINGTON — Boyle County’s bid to advance in the KHSAA State Softball Tournament is on hold.

Boyle’s semi-state game against Johnson Central was suspended Friday due to thunderstorms with the Rebels leading 1-0 in the third inning at John Cropp Stadium.

It will resume from the point of interruption at 1:30 p.m. Sunday.

The game started 1 hour, 50 minutes later than scheduled due to a weather delay in the preceding game, and play was halted at 4:35 p.m. when the umpires were told that lightning had been detected within 8 miles of the stadium.

Visible lightning and rain arrived soon afterward, and the game was suspended at about 5:15 p.m.

Boyle (27-6) scored the only run of the game in the top of the third inning when Hailey Cannon reached on an infield single, stole second base and came home on a two-out single by Summer Ray.

Ray and Kayleigh White had back-to-back two-out singles in the first inning but were left on base.

White, who was pitching for the Rebels, retired all seven batters she faced, striking out three. She had recorded one out in the bottom of the third when the game was stopped.

Chloe VanHoose, who was pitching for Johnson (33-6), had six strikeouts.

The Boyle-Johnson winner will advance to a quarterfinal game next Friday against Lewis County (23-8), which defeated Wolfe County 10-6 in its semi-state game.

Four semi-state games are scheduled for Saturday, and the completion of the suspended Boyle-Johnson game Sunday will be followed by two more games.

“While COVID-19 remains a threat, we are no longer in crisis,” Gov. Andy Beshear said during his final pandemic-related press... read more