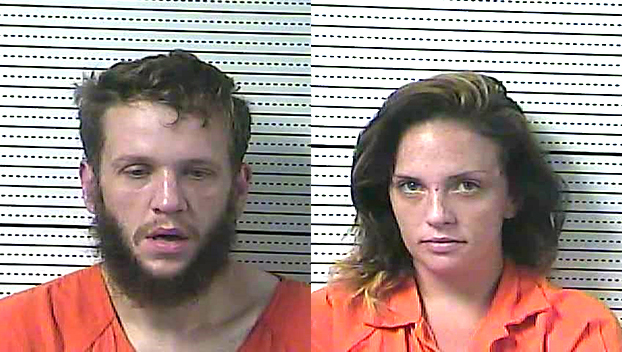 BOYLE COUNTY SHERIFF’S OFFICE
News release
On Monday, Danville police officers responded to the area of Lexington Road in reference to a male and a female possibly under the influence. The caller advised they had a small child in the car with them. Upon officers’ arrival the vehicle had already left the area, and a bolo was sent out to surrounding agencies.
At approximately 2 p.m., Boyle County Sheriff’s Office Captain Casey McCoy observed the vehicle making a right turn onto Perryville Road. It was confirmed the registered owner, Jacob Tankersley of Nicholasville, had active warrants for his arrest.
A traffic stop was conducted on Ben Ali Drive, and contact was made with the registered owner and Hailey Turner, also of Nicholasville. The child was also in the back seat not properly restrained. Both subjects were confirmed to have warrants, and also found in the vehicle were numerous syringes and suspected methamphetamine.
Tankersley and Turner were both transported to Boyle County Detention Center charged with first-degree wanton endangerment, possession of methamphetamine and drug paraphernalia. Tankersley was additionally charged with driving under the influence of a substance. The child was safely released to a family member.
Officer Ben Ray, Deputy Al Issacs and K9 Deputy TJ Wren assisted in the investigation.
Tankersley’s bond was set at $10,000, according to the BCDC website, and Turner did not have a bond listed, according to the website.
You Might Like

FRANKFORT, Ky. (KT) – An increase of COVID-19 cases in Kentucky due to the Delta variant has led Gov. Andy... read more