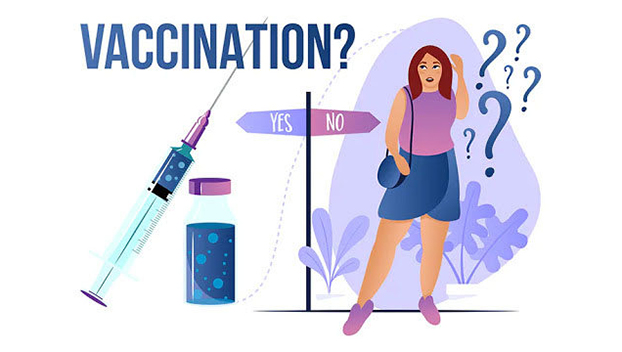 One of the many challenges facing Kentuckians who remain unvaccinated against the coronavirus is that they still have unanswered questions about vaccines, some based on facts and others based on myths. This story is an attempt to sort through some of those questions and to counter misinformation.

This information is not only for the unvaccinated. Kentucky Health News encourages individuals who have already been vaccinated to use it as a resource when talking to their loved ones about getting vaccinated, since friends and family have proven to be highly influential in persuading them to do so. 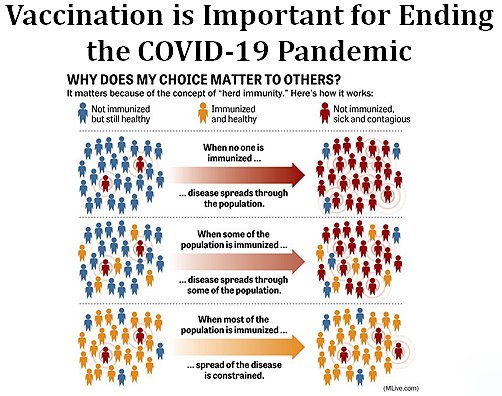 Covid-19 is no worse than the seasonal flu, right?

Wrong. While influenza and Covid-19 are both contagious respiratory illnesses, they are caused by different viruses. Covid-19 appears to be more contagious and to spread more quickly, and is more deadly. Preliminary estimates from the Centers for Disease Control and Prevention are that the U.S. had 38 million flu cases and 22,000 deaths from it in the 2019-20 flu season, for a death rate of 0.06 percent. The U.S. has had nearly 34 million confirmed cases of the coronavirus and nearly 607,000 deaths from Covid-19, for a death rate of 1.79%. In Kentucky, there have been 473,503 cases and 7,308 deaths. a death rate of 1.54%.

Kids don’t get it, do they? Yes, they do. Children can be infected with the virus, and can get sick from Covid-19 and spread the virus to others without knowing they have it. In Kentucky, 15.5% of cases have been in people under 20. Most children have mild symptoms or no symptoms, but some have become severely ill from the disease and a few have died. They can also get a rare but serious condition, Multisystem Inflammatory Syndrome in Children, that sometimes doesn’t show up until weeks after the infection. Kentucky has had more than 50 reported cases, according to the CDC. The more contagious variant of the virus that recently became dominant seems to affect them more; the American Academy of Pediatrics and Children’s Hospital Association’s weekly Children and Covid-19 State Data Report says more than 23,500 child cases of Covid-19 were reported between July 8 and 15, nearly double what was reported in late June.

These vaccines were developed very quickly; how can we be sure that they have been fully researched and proven?

The vaccines were developed, tested and given emergency-use authorization in under a year, thanks to years of previous research on related coronaviruses. Researchers had also been working on the technology for years and the timing, and federal funding by Congress and the Trump administration allowed companies to run multiple trials at the same time, saving lots of time. Surgeon General Vivek Murthy said on Twitter, “There were no corners cut in making these vaccines, what was cut was actually red tape.”

There has always been a long, deliberate process at the Food and Drug Administration to fully approve a drug, involving a review of much more data over a longer time than is required for emergency use authorization. The FDA has until January to review the materials, but has said it expects to make a decision on full approval within two months.

Why hasn’t the military required them?

It appears that they are waiting on the full approval of the vaccine by the FDA before doing so. At this time they are voluntary. The Army has directed commands to prepare to administer mandatory Covid-19 vaccines as early as Sept. 1, pending full approval of the FDA licensure, reports Army Times. The Navy also recently told sailors to expect a mandatory vaccination program as soon as final approval is granted.

Does this new type of vaccine change your DNA?

“Covid-19 vaccines do not change or interact with your DNA in any way,” the CDC says. The new types of vaccines deliver instructions “to our cells to start building protection against the virus that causes Covid-19.” Johns Hopkins University says, “The messenger RNA from two of the first types of Covid-19 vaccines does enter cells, but not the nucleus of the cells where DNA resides. The mRNA does its job to cause the cell to make protein to stimulate the immune system, and then it quickly breaks down — without affecting your DNA.”

What are the issues with the Johnson & Johnson vaccine? Is it still recommended?

In April 2021, the J & J (Janssen) single-dose vaccine was paused while the FDA and the CDC investigated a very small number of cases of blood clots in people who had received it, nearly all of them adult women younger than 50. The FDA and CDC recommended that administration of the vaccine could safely resume.

In July, the FDA added a new warning about the J & J vaccine because it was linked to a rare neurological condition, Guillain-Barré syndrome. Preliminary research found 100 people, out of more than 13 million U.S. doses, who had developed the syndrome after receiving the vaccine; one died and 95 were hospitalized. The FDA said in a news release that after evaluating the information it has determined that “the known and potential benefits” of the vaccine “clearly outweigh the known and potential risks.”

What are the side effects?

The most common side effects are pain, redness and swelling on the arm where you got the shot. Other side effects are tiredness, headache, muscle pain, chills, fever and nausea. Side effects after a second shot may be more intense. There have been two confirmed cases of the rare blood clot following the Moderna vaccine, out of 137 million doses.

Serious adverse reactions after a coronavirus vaccination are rare, says the CDC. Anaphylaxis, which can occur after any vaccination, is severe and has occurred in 2 to 5 people per million vaccinated in the U.S. Clinics keep people 15 minutes after the shot to make sure they don’t have a reaction.

As of July 19, there have been 1,148 reports of myocarditis or pericarditis among people 30 and younger who received a coronavirus vaccine. Most cases have followed the Pfizer or Moderna vaccine, particularly in male adolescents and young adults. The CDC has confirmed 674 cases; almost 340 million doses have been given, mostly the two-dose vaccines.

Will I need a booster shot?

Boosters are common for many viral infection because the vaccine effect may wane. There is concern that the vaccines won’t offer sufficient protection against new variants and that high-risk individuals, including seniors, who have weaker immune systems, will need them, Medical News Today reports. The CDC and FDA say they are “prepared for booster doses if and when the science demonstrates that they are needed.”

I don’t need a shot if I’ve already had the virus, do I?

The CDC recommends that those who have been infected with the virus should  be vaccinated, because we don’t how long or strong the resulting immunity is. “While there is no recommended minimum interval between infection and vaccination, current evidence suggests that the risk of reinfection is low in the months after initial infection but may increase with time due to waning immunity,” the CDC says. Recently, hospitals in Missouri treated unvaccinated people who developed Covid-19 for the second time, NBC reports.

I got fully immunized, but then got infected. How did that happen?

No vaccine is 100% effective, health officials say. The Pfizer and Moderna vaccines are about 95% effective in preventing Covid-19 in those without prior infections. The Johnson & Johnson vaccine has a 72% overall efficacy rate and an 86% efficacy against severe disease in the U.S. Research is still ongoing to determine the effectiveness of each vaccine against the Delta variant, but so far most studies show that they are protective, especially against severe illness and death. Healthline reports on a number of studies that support the effectiveness of the three approved vaccines against the Delta variant.

A study published in the New England Journal of Medicine found that after two doses, the Pfizer vaccine was 88% effective against the highly contagious Delta variant, compared with 31% after one dose. Health officials told The Washington Post that the Moderna vaccine likely offers a similar level of support. Some small studies show that the J&J vaccine is effective against Delta and other variants, but a New York University study that has not been peer-reviewed, shows that it is far less effective against Delta other variants than earlier strains, Forbes reports.

Why are we hearing so much about the Delta variant?

It is now by far the dominant strain in the U.S. and Kentucky, and is reported to be about 225 percent more transmissible than the original strain of the virus.

People who are not fully vaccinated are most at risk from the Delta variant. Also, a low vaccination rate in a community creates an opportunity for local outbreaks that have the potential to overwhelm the health-care system. Unvaccinated people, those who work in the public, and those who are considered high-risk are encouraged to wear a mask in indoor spaces. Some health officials say everyone should be doing so, especially in places with rising rates of infection. Children under 12 have not been approved for a vaccine, so they are also considered high-risk.

It’s important to remember that unvaccinated people are places for the virus to mutate even more, perhaps into even stronger variants. At Fort Bragg, N.C., Force Health Protection Officer Lt. Col. Owen Price, said on a podcast that we are “one mutation away from kind of rolling back down the hill.” He added, “I know everybody is Covid-spent, everybody’s over it. But we have to get to a point where there’s no safe haven for the virus to go, and we’re only going to do that through vaccination — and if we don’t get there, we’re going to back-slide.”

“The Covid-19 vaccine will not affect fertility,” say physicians at Johns Hopkins University in Baltimore. They said the myth sprang from a false report on social media that the Pfizer and Moderna vaccines would affect not only the spike protein on the surface of the virus, but another spike protein that is involved in growth and attachment of the placenta in pregnancy. “The two spike proteins are completely different and distinct, and getting the Covid-19 vaccine will not affect the fertility of women who are seeking to become pregnant, including through in vitro fertilization methods,” the doctors say. The CDC says, “There is currently no evidence that Covid-19 vaccination causes any problems with pregnancy, including the development of the placenta. In addition, there is no evidence that female or male fertility problems are a side effect of any vaccine, including Covid-19 vaccines.”

There are no microchips or any kind of device in the vaccines, but this hasn’t stopped about one in five people from thinking it’s true. First and foremost, it is physically impossible; James Heathers of The Atlantic examined the notion in detail. A related myth is that the vaccine can make you magnetic. The CDC says, “Covid-19 vaccines do not contain ingredients that can produce an electromagnetic field at the site of your injection. All Covid-19 vaccines are free from metals.”

Where can I get more information? And how do I tell truth from deception?

The Immunization Action Coalition provides a list of questions you should ask when evaluating health information online, such as the original source of the information and who manages it. The University of California-San Francisco offers tips on how to find credible sources of health information, including red flags to watch for, including outdated or anonymous information, possible conflicts of interest, one-sided or biased information, if there is a claim of a miracle or a secret cure, or if no evidence is cited.

Kentucky Health News is an independent news service of the  based in the School of Journalism and Media at the University of Kentucky, with support from the Institute for Rural Journalism and Community Issues, from the Foundation for a Healthy Kentucky.

Boyle County Treasurer Keagan Hinkle was notified that his employment with the county was being terminated following a 10-day paid... read more