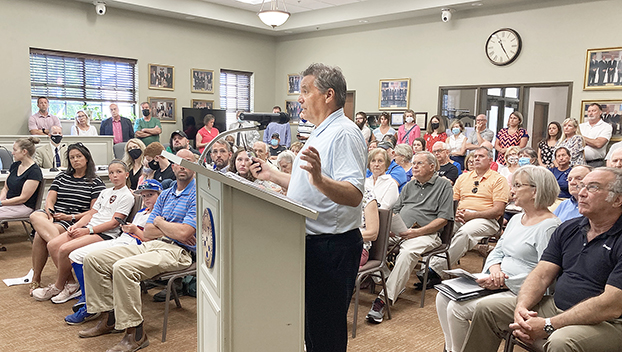 Danville-Boyle County Planning & Zoning Director Steve Hunter explains the zoning history of the assisted living property at the end of Argyll Woods Drive during a public hearing to amend its general business plan to convert it to a detox facility. - Photo by Robin Hart

The applicants for a proposed detox facility on Argyl Woods Drive didn’t show up for their public hearing Wednesday afternoon in front of the Danville-Boyle County Planning and Zoning Commission and a room packed with concerned citizens. Then after a nearly two-hour session of explanations of issues the commission was to consider, and testimonies against the project, the applicants withdrew their application just minutes before the commission was to vote on their plan.

The public hearing was for a general development plan amendment to convert the existing assisted living facility to a detox facility, and had been requested by URP Detox LLC and Homeplace Manor Services LLC.

The P&Z meeting, which had an unusually large number of items on the agenda, began at 9 a.m. at Danville City Hall meeting room which was standing room only. The overflow of concerned residents watched the proceedings while waiting for their case to be called from the training room in the basement of city hall.

At 11 a.m., the public hearing for URP Detox LLC and Homeplace Manor Services LLC was opened.

P&Z Director Steven Hunter presented the facts and details concerning the request for the general development plan amendment, and explained on what basis the commission was to base their decision.

After his presentation, when it was time to open the public hearing in favor of and against the project, Hunter looked around the room and said he didn’t know where the applicants were. “Are the applicants here? Hmmmm,” Hunter said.

He said he had talked to them just the day earlier and they said they were flying in from California and Florida, and the property owner was coming in from Lexington.

After a brief recess, Hunter returned and said on the second try, he reached one of the applicants who acknowledged they weren’t attending the meeting after all.

Hunter said, “A heads up would have been good.”

Attorney for the city of Danville Stephen Dexter asked the commission to proceed with the hearing, even though no one who had a stake in the project bothered to show up.

“I can’t imagine an issue of this magnitude that an applicant will have the lack of respect for the people’s time in this chamber not to appear or at least make a statement that they’re going to be late,” he said.

P&Z attorney Henry Smith advised the commission, “I don’t think there’s any law preventing proceeding today in the absence of the applicant. They submitted the application. Whether they choose to appear and give testimony is on them. … They had fair notice of it. They set the date on this matter. It seems to me they were given a fair chance.”

So the public hearing continued for more than an hour and a half, just to have it on record.

Dexter gave testimony on behalf of Danville against the project. Christopher Clendenen, attorney for the Lannock and Argyll subdivision residents, also presented his case as to why the application should be denied. Several residents explained why a detox center at the edge of their neighborhood and Millennium Park would be detrimental to the area.

When it seemed that everyone had said their piece and the commission was about to call for a vote, Smith announced that he had received an email from the applicant just 10 minutes earlier, requesting to formally withdraw the application.

The commission accepted it unanimously.

The email sent by Bryan Alzate, chief executive officer of the United Recovery Project to Hunter, stated as follows, with no corrections to grammatical errors. “Mr. hunter, I am so sorry no one informed you are withdrawing out application. I can not believe that didn’t get done and take responsibility. This is formal notice that as a company we are no longer pursuing Kentucky as a location to open a new facility. We withdraw our application.”

The Danville City Commission approved a first reading of an ordinance for intent to annex approximately 658 acres of unincorporated... read more