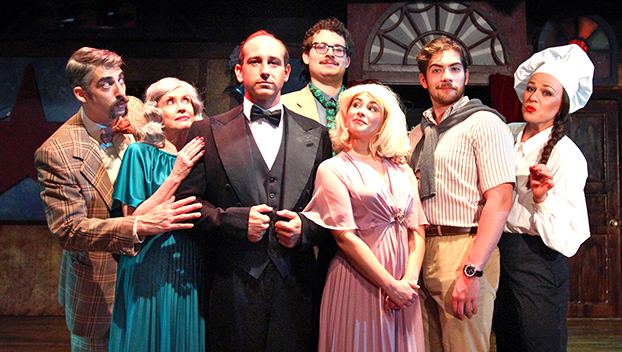 I have been impressed with how Pioneer Playhouse has used the space on its stage, how much it is able to morph and change as the plays do, and the set for “Jeeves in Bloom” was no exception. Within the span of about three days the stage transformed from a kitchen for “Southern Fried Funeral” to a garden for “Jeeves in Bloom.” The stage featured a lovely statue centerpiece for the garden done by an artist, with which the actors at times interacted.

I watched the play on opening night, July 27. This is the last play of the season. The acting itself was great throughout. It’s been fun watching these actors take on various roles throughout the season, some of them embodying very different or contrasting roles, dialects, and costumes. Though all the plays this season were comedies, they have all been distinctly different from each other, so it’s a testament to how flexible these actors are.

One criticism would be that at times it was difficult to understand a few of the actors during this particular play. Going forward with the play, I hope there will be more of an emphasis on projecting and enunciating, particularly for the sake of those in the back rows. Though I preferred “Clue: On Stage” and “Southern Fried Funeral” over “Jeeves in Bloom” in terms of plot, I did think the play closes out the season nicely and brings a different type of comedy and overall vibe to the table, and I understand my personal preference may be very different from that of others.

I enjoyed the costumes in this performance. It’s a British comedy that takes place in the 1930s, so the suits, flowy dresses, and high socks were delightful. Each costume seemed well thought-out and suitable for each character, but not distracting or impeding how they were able to move around onstage.

The adoration for the calm and centered butler Jeeves among all the characters, who could count on him to manage all manner of hijinks, was well-executed and evident. Silas Waugh also played this character well, this slightly stiff and serious butler bringing a grounded energy to an otherwise boisterous crowd. He brought a quiet grace to the stage.

Erika Lee Sengstack has been a notable chameleon this season, and this time she played a French chef, Anatole, who is violently protective of her prized recipe book. As usual, she went all in, and though it was a smaller role, she brought a lot of charm to it, and it was one of the standout comedic elements of the show.

Jessa DeLuca also embraced her role of Madeline Bassett, the flighty, slightly ditzy love interest of the newt-crazy “Gussie” Fink-Nottle who enjoys dramatic gestures. I found the flexibility of her voice and intonation impressive as well — hearing her effortless switch from her spot-on Southern accent in “Southern Fried Funeral” to her high, airy, chipper British one in “Jeeves in Bloom.”

And then there is the delightfully chaotic dynamic between Bertie, who Jeeves serves as butler, played by Giancarlo Herrera, and Gussie, played by Adian Chapman. Gussie, who has a deep love for newts and doesn’t know how to talk about much else, clumsily tries to navigate his attraction to Madeline with help from his friend Bertie, but things don’t go as smoothly as planned. There are also a few funny bits involving a newt he named after Madeline. Needless to say, Gussie is better with newts than people. Chapman and Herrera pulled off this socially-awkward-friend-and-wingman dynamic well.

Patricia Hammond’s performance as Dahlia Travers was also a fun one to watch, especially her delivery of her telegrams urging Bertie, her nephew, to visit her in the countryside. Eric Hedlund, who played Dahlia’s husband Thomas Travers, played a somewhat uncaring husband armed to the teeth to protect his roses and possessions. His prowling in the garden late at night with his pajamas and a gun were amusing and well-executed by Hedlund.

This play was directed by Daniel Hall Kuhn, who was an actor in both “Clue” and “Southern Fried Funeral.” According to a press release from Pioneer Playhouse, Kuhn is a long-time Playhouse favorite and has directed several shows there.

“Jeeves in Bloom” will be showing at Pioneer Playhouse until Aug. 7. Tickets are $20 for the show only and $35 for dinner and the show. Find more information about this play and upcoming performances at pioneerplayhouse.com.

On Monday, Tuesday and Wednesday afternoons this week, with temperatures above 90 degrees, Jenna Gordon treated her clients and their... read more