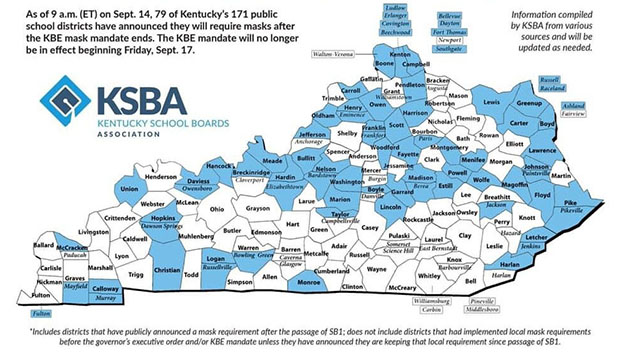 During the recent special session, the Kentucky General Assembly enacted legislation preventing the Kentucky Board of Education and the governor from establishing mask mandates in public schools, giving that power to local boards of education.

The state actions will be null and void effective Friday, but a number of local boards of education have already enacted their own version.

As of Tuesday evening, just five days after the legislature legislators enacted the mask ban bill by overriding Gov. Andy Beshear’s veto, 90 of Kentucky’s 171 local school districts have adopted its own mask mandates, according to a chart prepared by the Kentucky School Boards Association.

The actions were noted by Gov. Beshear during a Capitol press conference.

“Local school boards and superintendents have an important decision to make on masking but let me say I don’t think there is a decision,” he said. “There is one right answer where you choose masking where you protect your kids, where you keep them in school. And then there is one wrong decision, where you endanger children, and you allow COVID to spread throughout your community.”

The legislation, Senate Bill 1, also contains a requirement that a so-called “Test to Stay” program be developed by the Kentucky Department for Public Health, where children are tested daily in their school, to avoid being quarantined if they are exposed to COVID-19.

“Let’s step up and have the courage to be responsible for them.”