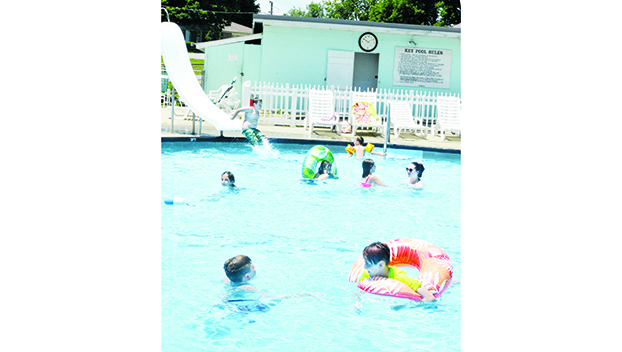 Pool open thanks to volunteers and two teenage girls

A neighborhood team of all ages saved their community pool and now they’re inviting others to join in the summer fun.

On a recent sweltering afternoon, several kids were splashing in the Streamland Pool as a couple of their moms watched and other adults basked in the sun. A babysitter played with a young swimmer, and a mother with her newborn stayed under the shade of a small pavilion. The water looked refreshing as it sparkled over the bright blue basin.

“That’s Ocean Blue,” said Streamland Swim Club Board Co-chair Scott Kleckner with a great big smile on his bearded face as he watched the kids play a game of water tag. That’s what makes this pool special, “it’s family oriented.”

Last summer the pool didn’t open due to COVID-19 restrictions. And for a while, he and others on the board were afraid it may never reopen.

There were a lot of expensive repairs that needed to be tackled before it could be filled and become the hub of summer fun for kids and their families — something that it’s been for 56 years, not counting last summer, Kleckner said.

So the board and others decided the pool needed to open this summer. We had the attitude, “If we build it, they will come,” he said.

In addition to money that the shareholders invested, two neighborhood teenagers, Campbell Johnson and Maggie Powell, worked for months soliciting donations to help pay for the repairs so the pool could open this summer.

“The girls raised all that money. They were trying to keep the pool alive. It wouldn’t be here without their help,” Kleckner said.

He said they went door-to-door and talked to people and left fliers asking for donations. They also set up a GoFundMe account just for the pool.

“The community rallied behind the girls.”

Plus there were a lot of volunteers to get the job done this spring, he added. They repaired three major cracks, installed a new chlorine pump along with a variety of other pumps and cleaned up all around the property and sealed painted the pool basin. And a neighbor does all of the mowing, for free, Klecker said.

Kleckner added, “They (Maggie and Campbell) saved this pool. We did the work and they financed it.”

Board member Paul Voss said in an email, “The pool has a long history and the efforts of these girls was significant in the ability for the pool to be open this year.”

He added that “Between the shareholders and Maggie and Campbell, we were able to raise $12,000. The girls’ efforts were roughly 75% of this.”

Voss said the normal operating budget for the pool is about $30,000 annually, but since it didn’t function last year they still needed about $12,000 just to maintain the property including taxes, loan payment, utilities and maintenance.

“The pool has shareholders that help annually to support the pool.” They raised about $3,000 last year, Voss said. “Without the efforts of Maggie and Campbell, the pool would have had to face very difficult decisions about the viability of its future.”

The board decided not to have a membership drive over the winter and spring because, “Due to the extent of the crack repairs, there was uncertainty if the pool would be able to open,” Voss explained.

But now that it’s once again in good working order — it’s actually holding water better than it has for a decade,” Kleckner said — they’re inviting not only residents of Streamland and nearby Brookcove and Colonial Heights as resident members, they’re asking if other families throughout the county want to join too, he said.

“We currently have about 50% resident and 50% nonresident members,” Voss said.

“Streamland pool has been a significant part of the community for the last 56 years. The pool first opened in 1965.” Voss said. “It is hard to find anyone that grew up in Danville that does not have memories of the Streamland pool.”

To find out more about Streamland pool vist their Facebook page; or email streamlandpool@gmail.com

Read past coverage by the Advocate-Messenger on the pool here.